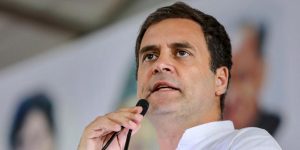 NEW DELHI: There is growing hatred since the BJP government came to power in the country, former Congress President Rahul Gandhi said today from the stage at the Congress’s mega rally against price rise that’s underway at the Ramlila ground in Delhi. He said people are afraid — about their future, inflation, and unemployment — and that’s turning them towards hate. “BJP and RSS are dividing the country,” he added.

The ”Mehangai Par Halla Bol rally” by the grand old party witnessed huge crowds amid tight security arrangements. Several senior party leaders addressed the audience before Mr Gandhi stepped in with his no holds barred attacks against the PM and ruling BJP.
Taking aim at the Prime Minister, the Congress MP said “only two businessmen” are enjoying benefits from the government. “Be it airport, port, roads…everything is being taken over by these two people,” he said, referring to PM Modi’s  rumored friendship with two top industrialists.
“The Prime Minister’s ideology says that we should give benefits to two people. Our ideology says everyone should benefit from the country’s progress,” he said, accusing the Modi government of being unable to provide employment and benefitting only select two big industrialists, who are “working for the Prime Minister 24 hours”. He alleged that the Prime Minister, in turn, is also working 24 hours for these two industrialists.
“Ever since the BJP government came to power at the Centre, hatred and anger has been increasing in the country. There is pressure on institutions such as media, judiciary, Election Commission, and the government is attacking all of them,” Mr Gandhi said at the ‘Mehangai par halla bol’ rally.

He further claimed the country has never seen such kind of price rise. “Common people are in great difficulty. Opposition is not allowed to raise these issues in parliament, be it tensions with China, inflation, or unemployment,” he added. The rally sets the stage for Rahul Gandhi to hit the street with the party’s 3,500-km ‘Bharat Jodo Yatra’ from Kanyakumari to Kashmir starting September 7, where the former party President will walk across the country highlighting the issues of price rice and unemployment, and promoting communal harmony.

The ‘Bharat Jodo Yatra’ is being touted as the Congress party’s biggest ever mass contact programme, where the party leaders will reach out to the common people at the grassroots level. “Connect With People Broken”: Rahul Gandhi Announces Yatras From October “With this yatra, we intend to meet the common people and tell them about the lies spread by the government…the misuse of central agencies. I was interrogated by ED for 55 hrs. I don’t care even if I am questioned for 100 years. We have to stand up against all this. This country does not belong to two people, but to farmers, labourers, and unemployed youth as well,” Rahul Gandhi said today.
To mobilise party workers for its ambitious event, Congress leaders held press conferences in 22 cities across the country early this week and gave a “Dilli Chalo” for the rally. In a Facebook post in Hindi, Rahul Gandhi had said the biggest problems facing the country today are unemployment, inflation, and growing hatred.The Congress has accused the Centre of being “insensitive” to the pain of the common people due to rising prices and said it will continue fighting for their cause on the streets as the principal opposition.
According to party Spokes person Jairam Ramesh, has nothing to do with the elections and is intended to send a message to the insensitive central government about how the country’s citizens are still suffering from unemployment and inflation.  : Speaking at Ramlila Maidan  Rahul Gandhi said the party along with other Opposition parties “together we will defeat the ideology of the BJP and the RSS”. He said that since the BJP came to power, anger and hatred have increased. He added that Narendra Modi is still the Prime Minister thanks to the media and two businessmen.
Hitting back at the Congress, Sambit Patra termed Congress’ ‘Halla Bol’ rally as Parivar Bachao rally. “If I tell you truly it was a Parivar Bachao rally to save themselves,” he said. Targeting the Gandhis, he said,”…You cannot even share Congress with the Congressmen today. Only two people, as if playing (the game) musical chair, keep becoming president. No third person can become the president,” he said.

Earlier in the day, former Minister Jairam Ramesh told news agency ANI that the rally has nothing to do with the elections and is a befitting message to the insensitive central govt as the people of the country remain troubled by inflation and unemployment.
Directorate and their questioning. “The ED asked me to sit for 55 hrs… but I am not afraid of your [PM Modi’s] ED. Whether it is 55 hrs or five months or five years.””Narendra Modi’s ideology says that country should be divided and the profits from it should be shared among few businessmen.”

“Congress gave India the historical MGNREGA, but Narendra Modi government said in the Parliament that it’s an insult to poor… today, if there would not have been MGNREGA, there would have been fires in the country. We took 27 crore people out of poverty and the Narendra Modi government, in the past ten years, has pushed 23 crores into poverty. Narendra Modi is taking the country backwards. This will help Pakistan and China and not India. The more there will be hatred and fear, the more the country would weaken… in the past ten years he has weakened the country.”
“We want to talk on China attack, unemployment, price rise, but we are stopped. The institutions, whether it is the media, the judiciary, or the Election Commission, are all under pressure so that way has also been stopped. So the only way we have is to go to people. So Congress will start the Bharat Jodo Yatra. I want to thank you for coming so far.
This is a fight of ideology and all the Opposition parties will come together to defeat BJP and RSS.”He concluded his speech by saying that all the opposition parties will come together and defeat the BJP and RSS. Modi cannot be PM without support from the media and two specific businessmen: Rahul Gandhi Rahul Gandhi, continuing his speech at Ramlila Maidan, said Modi cannot be the Prime Minister without support from the media or businessmen.  “The media is also of these two corporate houses, the whole of media is under those two businessmen. People know whose TV it is and whom they are working for. TV is of these two businessmen and papers are of these two businessmen. Narendra Modiji works for those two businessmen and those two businessmen work for Narendra Modiji.”
(With Agencies Inputs).