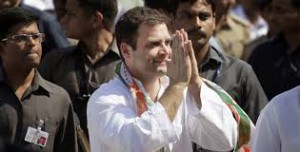 NEW DELHI : After a month of seeming procrastination, the Congress leadership will finally come in contact with potential voters with vice-president Rahul Gandhi’s road show in South Delhi’s Kalkaji Assembly constituency on Tuesday.
To be followed by at least two large public meetings, one of which will be addressed by Congress president Sonia Gandhi early next month, the party consistently postponed these due to Mr. Gandhi’s non-availability throughout January, according to an informed party source.
According to insiders, the party had initially planned to hold a massive public rally intended as a show of strength before the notification of the polls earlier this month at Ramlila Maidan. However, these plans were shelved after the BJP beat them by announcing Prime Minister Narendra Modi’s rally on January 10.
Meanwhile, the party, according to a source, booked the same venue for three consecutive days from January 14 to 16 but later postponed the booking for January 16 to 18 given Mr. Gandhi’s “unavailability”.
“The decision was taken after he couldn’t make it to Foundation Day celebrations on December 28 and was also absent from a meeting of all party general secretaries over the land ordinance issue despite it being his pet project,” a source told.
This, according to an insider, was the reason behind a group of Delhi Congress leaders approaching Ms. Gandhi with a request that both she and Mr. Gandhi play a ‘larger role’ and become ‘more visible’ in the party’s campaign for the Delhi elections.
A senior party leader, however, attributed the postponement of these meetings to an added emphasis on grassroots campaigning by candidates. “Such rallies have usually been held before the announcement of candidates… This time, it was decided to give local leaders a chance to organise their own campaigns and gauge the public mood first instead of holding a rally sans adequate knowledge of electoral issues that needed to be addressed,” the leader said.