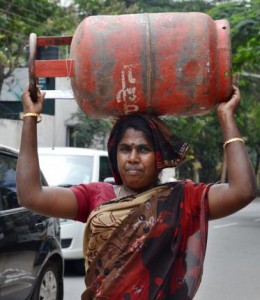 KOLKATA: A SMS from DD-IODTL which reads: “Give up your LPG subsidy & be part of nation building movement  to provide subsidized cooking fuel only to the needy. Visitwww.indane.co.in or distributor for details.’’

“The SMS was threatening enough said a middle-class house-wife Mrs Asha Mukherjee (not real name) who is a resident of Kolkata, we do not belong to economically upwardly middle-class who can afford to give up LPG subsidy….’’

Though Indian Oil Corporation (Indane) or Bharat Petroleum Corporation Limited (both of which supply LPG cylinders) officials when enquired declined to speak on the SMS, but a state government official confirmed that “new BJP-led NDA Government trying to avoid controversy over cutting off subsidy in LPG, and chose new high-tech infrastructure to persuade a large section of middle-class to willingly give up subsidy.’’

Apparently, in not-so-good economic condition just somehow sticking to middle-class category, thus Asha Mukherjee was threatened not without a reason.

“How a family with a minimum per capita income of Rs 2900 (West Bengal, as per a national daily report on Indian states per capita income) can afford to give up LPG subsidy and new BJP-led NDA seems to have adopted a more shrewder way than pro-reform UPA I & UPA II governments who preferred subsidy controversies,’’ said a professor of economics of Calcutta University.

Incidentally, Mrs Asha Mukherjee was an economic victim of a Planning Commission suggestion. Way back in early 2006 when a panel suggested PMO to “make hire and fire legally easier for firms so that they can concentrate on expansion’’ with more profits, implying they could invest in other business activities.

Though it was not known what happened to the report as keeping in mind about “pretentious Left on labour rights,’’ PMO ignored the report but in real terms despite taking Government rehabilitation packages to fight effects of global slowdown from 2007 to 2011, government turned a blind eye on number workers sent to roads, said a JNU professor of economics.

And BJP-led NDA far more shrewder, chose a novel way to get rid of subsidy on LPGs, though at least two major factories closed down recently in West Bengal leaving at least 1000 people added up to jobless growth in areas where BJP  polled handsome percent of votes. “National movement should focus on family planning, as empty stomach cannot give birth to nationalism,’’ said a LPG user.

“Any ministry should have a proper economic data card of consumers’ annual income, before they launch a novel way of persuasion, one needy family cannot give-up its poor subsidy rights for another needy…,’’ added the professor.