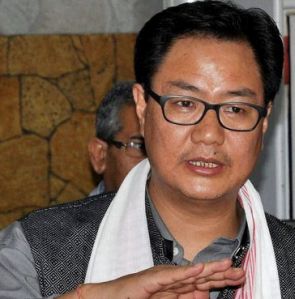 NEW DELHI: Union Minister of State for Home Affairs Kiren Rijiju on Sunday triggered a storm after he reportedly described India’s first prime minister Jawaharlal Nehru as a cold-hearted person for his stand on Assam during the Chinese aggression in 1962.
Rijiju said that people of Arunachal Pradesh, then part of Assam, would never forget what Nehru had said at that time in Parliament.

“Participating in a debate in Parliament over the Chinese aggression, the then prime minister Jawaharlal Nehru had said: ‘In those barren land and mountains of Ladakh and Arunachal, not even a blade of grass grows, why Parliament is wasting time,” said Rijiju, adding that it is a reality that China took over the entire western part of Arunachal Pradesh, which was a part of Assam in 1962.
“The Chinese had reached Assam in the foothills of Arunachal Pradesh, and the then prime minister Nehru had stated, ‘my heart goes out to people of Assam’, which amounted to surrendering of our territories to the Chinese,” ANI quoted Rijiju as saying.