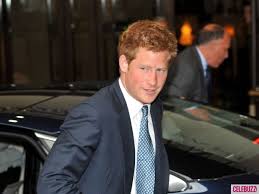 LONDON: Prince Harry has received a marriage proposal at the start of a three-day tour of Chile from a TV reporter named Middleton.Harry arrived in Santiago on Friday and during a brief walkabout in the country’s capital the 29-year-old Prince’s eye was caught by the TV reporter in the crowd wearing a tiara, The Telegraph reported.
“I like your tiara – very smart,” Harry told the reporter. Bernardita Middleton, a television reporter with a morning show on Chile’s Channel 13, replied: “I am a Middleton, like Princess Kate. I be your next wife Haaaaaary.”The Prince giggled sheepishly before moving swiftly on. Prince Harry’s elder brother Prince William is married to Kate Middleton.
Middleton is not an uncommon name in Chile, thanks to immigrants who evidently have many descendants. Prince Harry laid a wreath at a monument to the country’s founder Bernardo O’Higgins, himself the son of an Irish immigrant, among other engagements of his tour.