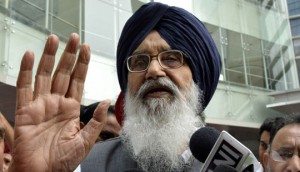 LUDHIANA: Punjab Chief Minister Parkash Singh Badal Friday called the recent incidents of supporters of political parties booing at public figures “undemocratic and morally deplorable” and urged them to maintain decorum during public functions.The chief minister, who attended the launch of scheme for the welfare of widows here at Punjab Agricultural University, said, “this unhealthy practice was not only undemocratic but also ethically and morally deplorable.”
Asked about the recent incident of ‘hooting’ at a function attended by Prime Minister Narendra Modi in Haryana, Badal said he did not know whether the incident was spontaneous or pre-planned.
Replying to another query regarding RSS Chief Mohan Bhagwat’s reported statement on Hindutva, the Chief Minister said, “India, a secular and sovereign state, was inhabited by people belonging to different castes and faiths. Therefore, we must respect all the religions and abstain from hurting the sentiments of people from different religions and cults.”He said that he had been a votary of peace, communal harmony and brotherhood throughout his political career.
While addressing the function, the Chief Minister lauded the philanthropic gesture of founder Chairman of Loomba Foundation, Lord Raj Loomba, for launching the project to offer self employment opportunities to the widows by imparting them training in tailoring, stitching, embroidery and dress designing.
The project has been jointly launched by Loomba foundation and state government with both making an investment of Rs 1 crore each.He called upon the leading industrialists and entrepreneurs to come forward for setting up such welfare projects in partnership with state administration and said the government would help them in this regard.The Chief Minister said the state government was already according matching grant to establish any sort of development project by NRIs in their villages/city.