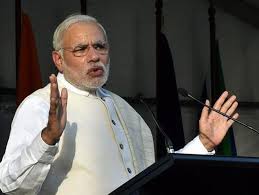 MUMBAI: Prime Minister Narendra Modi on Thursday asked the Reserve Bank to prepare a 20-year road map for financial inclusion and nudged banks to be considerate in giving loans to the poor as also while making recoveries from them, especially farmers.
“RBI will be completing 100 years in 2035…It will be appropriate for the central bank to work on the theme of financial inclusion and prepare a road map for achieving it,” he said while addressing a function to mark the 80th anniversary of the Reserve Bank of India.
The other milestones for achieving financial inclusion could be 150th birth anniversary of Mahatma Gandhi in 2019, 75th year of Independence in 2022, 90th anniversary of RBI in 2025 and 100 years of RBI in 2035, the Prime Minister said.
“These are four important dates…We can create a road map for financial inclusion,” he said, adding that the financial inclusion should not remain a government programme but should become “an article of faith”.
Expressing concern of farmers’ suicides and the plight of the poor people in the country, Modi asked the bankers to be considerate in providing financial assistance to poor.Farmers’ plight should, he added, shake up the conscience of the banking sector.
“Our farmers commit suicide. The pain of this should not only be restricted to newspapers and TV screens. When farmer dies, does it shake the heart of banking sector? Because of taking loan from money lender, he has to face death,” Modi said.
The Prime Minister also called upon the bankers to extend credit to resource rich eastern states.