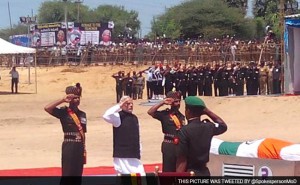 RAMESHWARAM: Many people were walking into Rameswaram to bid farewell to the People’s President, Dr APJ Abdul Kalam, even as last rites began before his burial at a public ground in the Tamil Nadu town where he was born.
At the Pei Karumbu ground, where Dr Kalam will be buried with full state honours, Prime Minister Narendra Modi saluted Dr Kalam’s body, wrapped in the Indian Tricolour. The PM then walked around Dr Kalam’s body hands folded.
Many chief ministers, union ministers and other political leaders like Congress vice president Rahul Gandhi are attending the last rites.
There are also thousands of people who have come from all over the country to pay their last respects to the much loved President. People have walked down the highway into Rameswaram, they have come in buses, trains and even boats. Many slept on the roads last night.
This morning the streets of the town were packed as Dr Kalam’s body was taken from his ancestral home to a mosque in a casket covered with a traditional green shawl, carried by personnel of the three services. Dr Kalam’s family, including his eldest brother 99-year-old Mohammed Muthu Meera Lebbai Maraicker accompanied his body.
There were slogans of “Bharat Mata ki Jai” and people waved the national tricolour as Dr Kalam’s body was then taken in a carriage covered with flowers to the burial site. Many stationed themselves on the terraces of buildings that line the roads to get a last glimpse of their hero.
Dr Kalam  died on Monday in Shillong after a massive cardiac arrest while delivering a lecture at the Indian Institute of Management. He was 83.
Known as the Missile Man of India, Dr Kalam played a pivotal role in the Pokhran-II nuclear test in 1998. He was awarded the Padma Bhushan and India’s highest civilian honour – the Bharat Ratna — for his achievements.