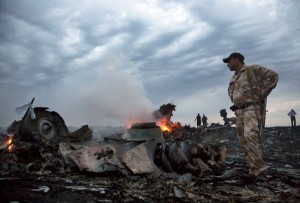 NEW DELHI: Prime Minister Narendra Modi’s flight was among the many planes that were re-routed after the Malaysian Airlines flight MH-17 was shot down in Ukraine on Thursday.Mr Modi, who returned last night after his trip to Brazil for a BRICS summit, tweeted today, “Our thoughts & prayers are with the families of those who lost their lives on board Flight MH17. We stand with them in this hour of grief.”
Reports say the PM’s Air India-One could have been in the same corridor as MH-17 perhaps an hour later. After the crash, it would have been rerouted over Black Sea.Sources say there is a notice to airmen barring planes from flying below 30,000 feet in Ukraine, which has seen fighting between its troops and pro-Russian rebels for the past few months.
The route is regularly used by Indian aircraft. There are other routes but the choice of Ukraine depends on weather conditions.Most planes avoid the other flight path, which is over the Simferopol FIR, because both Russia and Ukraine lay claim over the area and more than one air traffic control in the same airspace could have serious safety implications. Contradictory directions were recently issued by Russia and Ukraine. The UN aviation agency announced that the right to provide air navigation services in the region belonged exclusively to Ukraine, something Russia has contested since it now controls the Crimean region of Ukraine.
The Indian aviation regulator has now directed Air India and Jet Airways – the only two airlines to fly to Europe and America – to avoid eastern Ukraine.All 298 people on the Malaysia Airlines plane were killed after the aircraft was shot down over war-torn eastern Ukraine near the Russian border.The Malaysia Airlines Boeing 777  flying from Amsterdam to Kuala Lumpur could have been brought down by a ground-to-air missile, say US officials.