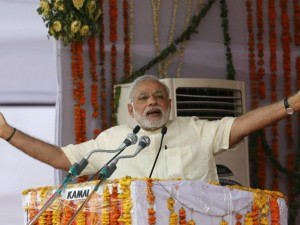 NEW DELHI: As the government it leads celebrates one year in office, the BJP today declared an all-out war on the Congress and attempted to counter its charges of a pro-corporate, anti-poor policies. While the month-long programme focused on the welfare policies, Prime Minister Narendra Modi launched a Doordarshan 24-hour channel dedicated to farmers.
Here are the latest developments:Underscoring the importance of Krishi Channel, the Prime Minister said before the launch of sports channels, “sports was seen from a limited point of view…The farming community is a big one and if we have to take India forward we will have to take the villages forward.”
“More than half the farmers don’t know that the government has a department for agriculture, there is a minister … If we can take modern science and technology to villages, the youth will come back to farming,” he added.
Earlier, BJP chief Amit Shah said the biggest achievement of the year-old NDA government lies in “restoring the people’s confidence in government”. “This government has restored the pride of the Prime Minister’s Office,” he said.
At the Lok Sabha constituency of Congress vice president Rahul Gandhi, Union minister Smriti Irani called herself the “daughter of family that is Amethi” and promised to pay from her own pocket for the insurance of 25,000 women.
Showcasing the economic indicators, Union minister Ravi Shankar Prasad said the retail and food inflation has dipped. “In April 2015 the general inflation was 8.48% now it’s 4.87%. The food inflation was 9.21% in April 2015 and now 5.11%… the wholesale price inflation is (- 2.65%),” he said.
As part of the month-long initiative, ministers and senior leaders will address around 250 rallies across the country; 350 specially designed mobile vans will tour 643 districts and showcase the government’s achievements through audio-visual clips.The Prime Minister – who opened the celebrations yesterday with a massive rally in Mathura — this morning tweeted links to a new section on his website www.narendramodi.in, titled SaalEkShuruaatAnek (one year, many beginnings).
In an open letter to citizens published in leading dailies, the PM wrote he has “devoted every moment of every day, and every element of my body and spirit to fulfil my responsibility.””Share your thoughts using #SaalEkShuruaatAnek & get a personal message from me! Looking forward to hearing from you,” he tweeted.The Congress, meanwhile, took on the government with programmes planned in several cities. While Rahul Gandhi will hold a rally in Kerala, in Delhi, the party screened a video about what it called the government’s repeated U-turns on black money, land boundary agreement and women safety.