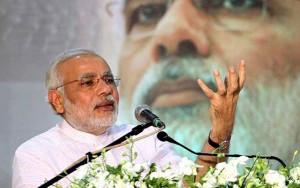 NEW DELHI : Prime Minister Narendra Modi Saturday asked bankers to speed up the process of linking all Jan Dhan bank accounts to Aadhaar and indicated that these accounts would be used for providing credit, insurance and pension services in the second phase of the scheme.
He wrote an email to all bankers to appreciate their “exceptional work” done to implement the Jan Dhan Yojana and said 99.74 per cent of all households in the country have been covered, surpassing the target.
The government will ensure that many more schemes utilise the Direct Benefit Transfer (DBT) platform, he said.Contending that the bankers had proved sceptics wrong by achieving what “appeared impossible”, he said it should motivate them further.
“It gives me great pleasure to have seen the exceptional work done by you all in ensuring the success of the Pradhan Mantri Jan Dhan Yojana. The target set for opening bank accounts for all households has been surpassed well ahead of the target date of 26 January, 2015,” he said in the email.
Congratulating the bankers for their “extraordinary efforts”, he said “by opening 11.5 crore new accounts in a very short span, we have achieved a coverage of 99.74 per cent of all households in the country.”
He then went on to add: “we need to redouble efforts on financial literacy. Aadhaar seeding needs to improve further. Bank Mitras need to be enabled to carry out RuPay card and Aadhaar enabled transactions in villages itself.”
He said he wanted the bankers to work to ensure that each account-holder enrols for Aadhaar and seeds it in the bank account. “This needs to be done for all accounts. I am sure you will do this seeding with the same zeal you showed in driving bank account opening,” he added.
“We need to build on this success and leverage these accounts to provide our citizens a wide range of credit, insurance and pension services. We also need to maintain high standards of customer service. This is the next phase of Pradhan Mantri Jan Dhan Yojana,” he said.