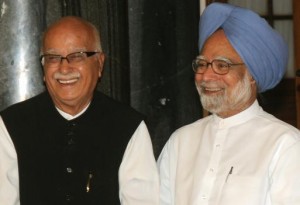 NEW DELHI : Prime Minister Manmohan Singh has invited top BJP leaders – LK Advani, Rajnath Singh, Sushma Swaraj and Arun Jaitley – for dinner on Wednesday where the PM will reportedly discuss the stalemate in Parliament and the Lokpal Bill, which became a flashpoint between the government and the main Opposition party last week.
The appointment of India’s first ever Lokpal got off to a bad start with the BJP formally opposing the PM’s choice of a jurist for the panel that will select the national anti-corruption ombudsman. Sources said last week that the BJP is likely to take its protest to the President.
The BJP has recorded in writing its objection to the appointment of Supreme Court lawyer PP Rao as a member of the Lokpal selection committee, a decision that has reportedly been endorsed by the party’s top leaders including Narendra Modi, its prime ministerial candidate.
At a meeting last week, Sushma Swaraj, who is leader of opposition in the Lok Sabha, was reportedly outvoted 3-1 on the choice of Mr Rao, whom she described as a “Congress loyalist who had appeared in court for the ruling party several times.”
Prime Minister Manmohan Singh, Lok Sabha Speaker Meira Kumar and Justice HL Dattu, the Supreme Court’s number 3 judge who was been nominated by the Chief Justice of India to represent him on the panel, all voted in favour of Mr Rao.
According to sources, the dinner hosted by the PM on Wednesday will include talks on the row over Mr Rao along with the logjam in the ongoing session of Parliament.
The session, the last before the national elections, is heading for a washout with little business transacted last week.  The Congress-led UPA government at the Centre, which has been saddled with corruption charges in its second term, has attempted to get key legislations passed, but has failed in the first of the two-week session. The Congress agenda has 39 bills, including a proposal to create a new state, Telangana by carving it out of Andhra Pradesh.
Ahead of the session, the Prime Minister had said, “I sincerely hope that Parliament, in its wisdom, will transact the essential business which is the primary concern of a legislature in a parliamentary democracy.”