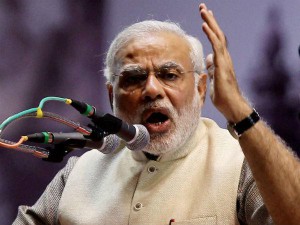 CHANDIGRAH: Prime Minister Narendra Modi on Friday hit out at Congress over deadlock in Parliament, saying 40 MPs are “conspiring” to hamper the country’s development against the wishes of 400 MPs which is an “insult” to democracy.
In a hard-hitting speech at a public meeting, he said he decided to share his feelings before the public because ‘jan sabha’ (public assembly) is above Lok Sabha where the government’s voice was being “throttled” despite being given a massive mandate by the people.
Time has come to spread awareness about democracy in the country and for the people to pressurise their representatives to do their work in Parliament by asking questions and debating issues and letting the Houses function, he said after inaugurating a slew of projects.
The people will not forgive such opposition parties, Mr. Modi said.“Beyond Lok Sabha is ‘jan sabha’ and that is why I am expressing my views here. Some people (opposition) are doing this just for their arrogance. There can be nothing more unfortunate than this. The people will not forgive these parties for their conduct in Parliament,” he said.
“40 MPs are conspiring to block development of the country against the wishes of the 400 MPs,” the Prime Minister said attacking Congress.
Noting that the region sends large number of people to the armed forces, he said his government delivered on its promise of implementing one-rank, one-pension (OROP).
The Prime Minister said no previous government paid adequate attention to the enormity of the exercise and attacked the previous UPA dispensation, saying if it had thought about it then it would not allotted only Rs 500 crore.
The armed forces veterans should thank the poor people of the country for implementing OROP which entails a whopping Rs 10,000 crore expenditure per annum, he said.