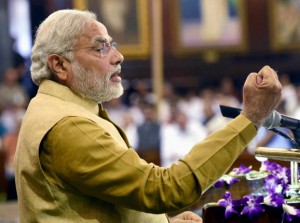 NEW DELHI :Prime Minister Narendra Modi has asked the Law Ministry to urgently review criminal cases against parliamentarians so that they can be expedited.    In his election campaign, Mr Modi, 63, had vowed a zero-tolerance policy on graft if he was selected by voters.
Mr Modi had said in his campaign that his government would expedite the cases of leaders from all parties as part of his effort to deliver clean governance.He stressed his administration would steer clear of political vendetta, but he also underscored that the law would be followed and the guilty would be punished, irrespective of their clout.
He had said the Supreme Court would be urged to fast-track cases against law-makers elected to Parliament, state assemblies or local corporations.
He took the same stand when asked about a potential investigation against Robert Vadra, the controversial businessman who is the son-in-law of Congress president Sonia Gandhi. The Congress has repeatedly refuted allegations that Mr Vadra saw huge financial benefits from illicit land deals from the Congress government in Haryana.
During the campaign,  Mr Modi and other BJP leaders alleged that Mr Vadra ‘s windfall fortune was facilitated through the patronage of his powerful mother-in-law and her son, Rahul, who is No 2 in the party.In response, Mrs Gandhi’s daughter, Priyanka, had urged voters in the Gandhi constituencies of Uttar Pradesh to avenge the humiliation that she said was being heaped upon her by the character assassination of her husband.
A series of top politicians from different parties and states are accused in criminal cases. Jagan Mohan Reddy of Andhra Pradesh is being tried for corruption, as is Jayalalithaa, the Chief Minister of Tamil Nadu. Mr Modi’s top aide, Amit Shah, who was recently made BJP president, faces murder charges for allegedly sanctioning the extra-judicial killing of Muslims in Gujarat by top police officers. Mr Shah has denied the charges.