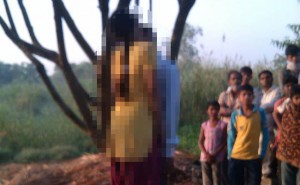 MUZAFFARNAGAR: The young man and woman were found hanging from two ends of a dupatta flung across the branch of a tree, in death very close. The police allege that Rajnish, 22, and Imrana, 18, made a suicide pact because they were not allowed by their families to marry as they belonged to different communities.
Rajnish, a Hindu Dalit man, and Imarana, a Muslim girl, of Bhorakhurd village in communally sensitive Muzaffarnagar, Uttar Pradesh, had been missing since last night, the police said.
They were found hanging from the tree this morning, a pair of slippers stacked nearby, in what brought back the tragic image of two young teen girls, cousins, who were found hanging from a tree last year in another village in Uttar Pradesh.
Police said the couple had been in love for about four years now, but their families were unyielding in their opposition to them marrying. Recently, Imarana, they said, was engaged to be married to a man of her community.
The police are prima facie treating their death as a case of suicide. The bodies have been sent for post-mortem.”Had absolutely no idea about this. Don’t know if there was any foul play, the cops should find out,” said the young man’s father.
“To us it is a case of suicide. The police are investigating,” said the woman’s mother.Two years ago, western Uttar Pradesh was torn apart by riots epicentred in Muzaffarnagar. In the worst communal violence in a decade in the country’s largest state, more than 65 people were killed and about 40,000 were left homeless.It took months for many to return home as fear stalked the region.