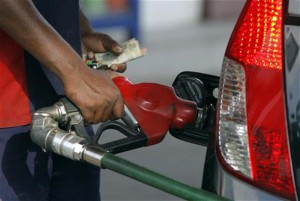 NEW DELHI : Petrol price was today cut by Rs. 1.82 a litre, the third reduction in rates this month, but diesel rates were hiked by 50 paise per litre. The revised rates are effective from midnight tonight, oil companies announced today. With international oil rates on the decline, petrol price was cut by Rs. 1.51 a litre, which after including local sales tax or VAT translated into a reduction of Rs. 1.82 a litre in Delhi. Petrol in Delhi will now cost Rs. 68.51 a litre from tomorrow as against Rs. 70.33 currently.

In line with the January 2013 decision to hike diesel prices till retail rates come on par with its cost, rates were hiked by 50 paise a litre. After, including VAT, the increase in Delhi came to 57 paise. Diesel will cost Rs. 58.97 per litre in Delhi from tomorrow compared to Rs. 58.40 currently. Rates will vary from city to city depending on local sales tax or VAT. Petrol price was cut by 90 paise (Rs. 1.09 a litre after including local sales tax) on August 1 and again by Rs. 1.81 (Rs. 2.18 per litre, after including VAT). At Rs. 68.51, petrol price is lowest since June last year when it was sold Rs. 68.58 per litre. Indian Oil corp, the nation’s largest fuel retailer, said the downward trend in international prices has also warranted a cut in price of non-subsidised cooking gas (LPG) by Rs. 19 pe 14.2-kg cylinder.
None-subsidised LPG is the one that household consumers buy after exhausting their quota of 12 bottles in a year. Subidised cylinder costs Rs. 414 per litre in Delhi. A 14.2-kg non-subsided LPG cylinder will cost Rs. 901 from tomorrow as compared to Rs. 920 currently. Also, the rates for bulk diesel, which is priced at market rates, was cut by Rs. 1.32 per litre in Delhi. As per government policy, bulk users like railways, defence and state road transport corporations buy diesel at market price, which is higher than pump rates. Following are the revised prices of petrol and diesel in four metros after oil firms revised rates with effect from midnight: