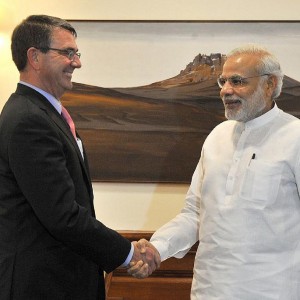 WASHINGTON: The Pentagon has established a first-ever country special cell to speed up its defence ties with India and accelerate the process of co-development and co-production of hi-tech military equipment in the country.
Established soon after Defence Secretary Ashton Carter assumed Pentagon’s leadership role in February, India Rapid Reaction Cell (IRRC) is headed by Keith Webster, Director, International Cooperation Office of the Under Secretary of Defence for Acquisition, Technology and Logistics.India is the only country to have a specific cell of its kind inside the Pentagon.
Currently, seven persons are working on this cell, representing various wings of the US Department of Defence.Given the new thrust on India-US defence relationship under Carter, officials say there is quite a few on the waiting list who have shown keen interest in working at the Pentagon’s India Rapid Reaction Cell.
“The purpose of India Rapid Reaction Cell is to work all the initiatives that we have ongoing under (India-US) DTTI (Defence Trade and Technology Initiative) both the initiatives that for example came out of the joint statement between the (US) President and the Prime Minister in January (in New Delhi) to move quickly and timely and be through, which in my opinion requires dedicated support to ramp up the operational tempo,” Webster told PTI.

“We are embarking on some new initiatives and the operational tempo is not declining at all,” he said.In the next coming months, a series of high-level exchanges are scheduled to take place, including that of Defence Minister Manohar Parrikar to the Pentagon.
Defence and Strategic relationship would be a key topic of discussion when US President Barack Obama meets Prime Minister Narendra Modi on the margins of the UN General Assembly in New York later this month.
India Rapid Reaction cell, he said, has been instrumental in accelerating the DTTI projects and has started the process to send some new proposals to India for co-production and co-development.
The mobile hydroelectric initiative and for-the-next- generation initiatives required negotiations, conclusion and signing of bilateral agreements.
“Statistically, such a negotiation between US and India which was done before many times takes on an average a year and half to three years. We were done within three months on the US side with India,” he said, adding that the documents were finally signed by the Indians last month.
Similar fast-track progress is being made on the other initiatives announced during Obama’s trip to India in January.In a joint statement, the two countries announced four products for co-produced – next-generation Raven unmanned aerial vehicles (UAVs), ‘roll-on, roll-off’ intelligence- gathering and reconnaissance modules for C-130J Super Hercules aircraft, mobile electric hybrid power sources and uniform integrated protection ensemble increment-2 (chemical, biological warfare protection gear for soldiers).
In addition, Obama and Modi announced that working groups will be set up to explore development of aircraft carrier technologies and jet engines.The India Rapid Reaction Cell is looking into another 25 proposals that has come from American defence industry for co-development and co-production.
The cell received these proposals after Under Secretary of Defence Frank Kendal, who is the US-lead for DTTI, wrote in a recent letter to the US industry, urging them to come up with proposals and ideas for ambitious and path-finding projects by the end of August.

“I encourage industry partners to continue identifying opportunities that offer exclusive co-development and/or co-production in India, meet expressed Indian interest, including ‘Make in India’ and have potential for global market sales,” Kendall wrote in his letter.
Webster said after the review of these 25 projects is completed, the Pentagon would submit another set of proposals of pathfinder projects to India in the coming months for co-development and co-production.