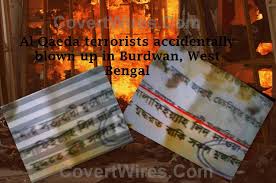 BURDWAN/KOLKATA: As accidental explosion in faceless Khagragarh village breaks open global Islamic terrorist kinks, but reeling out details both by investigating State and Central intelligence agencies strike a sense of terror in the minds of Union Home Ministry.The investigations, interrogations in Bengal village revealed the network not only spread into other villages of Bengal and Assam, but roadmap of game plan stretched across Afghanistan via Pakistan and on East, Bangladesh and Myanmar!
Though State Home Ministry and his Secretary B Bandhopadhyaya did not reveal much, but sources said Chief Minister Mamata Banerjee remained silent still on 9th day though much “pampered Madrasas in bordering districts’’ have come under scanner of investigating agencies, “as roots get laid on in these madrasas,’’ said a South Bengal BSF official. Observers here believe Trinamool Congress MP Imran’s Jammat (Bangladesh) and SIMI connection may have pushed Mamata Banerjee into silence. Incidentally, Imran was interrogated for allegedly pumping in Saradha Chit fund money to Jammat in Bangladesh!
More revelations confirmed that for carrying out terrorist planning money flowed in also from Saudi Arabia. “It was a massive global planning behind this village’s open hideout, which kept us fooled for years,’’ said Central intelligence official, adding, “all central Governments should have taken seriously when sometime former chief minister Buddhadeb Bhattacharjee in 2001 told two reporters at Writers’ Buildings that Saudi funded bordering districts Madarsas have become dens of Islamic fundamentalists.’’
“It was a open alert by former chief minister, if heeded now we may not have experienced a peaceful village turning into what it is today,’’ said one of the two reporters who Buddha divulged it to.