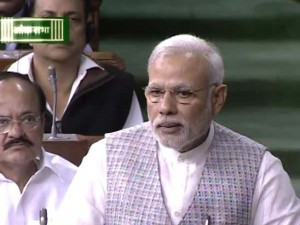 NEW DELHI/SRINAGAR: Prime Minister Narendra Modi today said in Parliament that the release from prison of hardline separatist Masarat Alam in Jammu and Kashmir was unacceptable and that the decision was taken without the Centre’s consent.
“I also lend my voice to the outrage on the release of the separatist… this is not one party’s outrage, it is the nation’s outrage,” PM Modi said in the Lok Sabha, promising that there will be “no compromise on the integrity of the nation” or public safety and security.
The Jammu and Kashmir government, PM Modi said, had not consulted the Centre on “its activities post government formation,” last week.”Don’t teach us patriotism,” he told the Opposition, which was on its feet as PM Modi’s speech ended, with the Congress’ Mallikarjun Kharge suggesting, “If you feel so strongly about this, why doesn’t the BJP withdraw support to the PDP?”
Earlier, Home Minister Rajnath Singh said that the Centre had asked the Jammu and Kashmir government for a report on the release and was not satisfied with its response. “I assure the House that after the full clarification from the state government, if needed, we will issue the most severe advisory,” Mr Singh said, listing charges against Masarat Alam, which, the minister said, include that of sedition.
Masarat Alam, 44, arrested in 2010 for allegedly fanning trouble during street protests in which over 100 people died in Kashmir, was released on Saturday from the Baramulla jail on the order of chief minister Mufti Mohammad Sayeed, whose Peoples Democratic Party or PDP has just formed government in Jammu and Kashmir in an alliance with ideological opposite, the BJP.
The PDP says Mr Alam has been released as part of its reconciliation effort and separatists cannot be engaged with or brought into the peace process if they continue in jail.This is the second time in less than 10 days that the BJP’s newest ally has made it vulnerable to the opposition’s attack – the Mufti had earlier thanked “people from across the border” – seen as a reference to Pakistan – and militants for allowing smooth elections in the state.