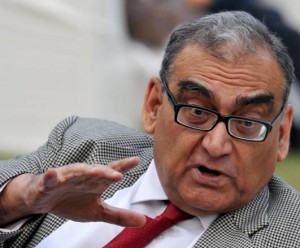 NEW DELHI : A three-member committee has been
formed by the Press Council of India to probe into the
complaint that the reporters of two newspapers were being
prevented from attending the press conferences of Chief
Minister of Andhra Pradesh.
PCI Chairperson Justice (retd) Markandey Katju, formed a
3-member committee, comprising journalists Rajeev Ranjan Nag
as convenor, K Amarnath and Prajnananda Chaudhury as members,
to enquire the matter.
In an order issued today, Katju said it had been brought
to his notice that the “accredited reporters of ‘Saakshi’
daily and ‘Namaste Telangana’ newspapers were being prevented
from attending the official press conferences of the Andhra
Pradesh, Chief Minister.”
Justice Katju, while ordering the probe, said on careful
consideration of matter on the basis of representations from
National Union of Journalists (India) and Indian Journalists
Union, he ‘prima facie’ believed that restrictions on the
reporters in covering the press conference affects the freedom
of the media of access to and dissemination of news.”
The committee would shortly be visiting Hyderabad to
execute its mandate, a press release issued here said.
As per the PCI order, the Committee should meet and
interact with all stakeholders in Hyderabad and elsewhere, as
well as the concerned authorities and others concerned. PTI