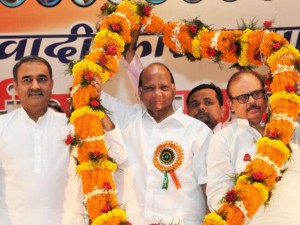 PATNA: Maratha strongman Sharad Pawar was on Thursday unanimously re-elected as the president of Nationalist Congress Party (NCP), a post he has occupied since he founded the party in 1999 after parting ways with the Congress.
The 74-year-old Mr. Pawar’s re-election was declared by NCP general secretary T.P. Peetambhar Master at the party’s sixth national convention, where Pawar’s nephew and NCP legislature party leader Ajit Pawar was conspicuous by his absence.
Queried about the absence of Ajit Pawar, top party leaders said they were unaware why he did not participate in the convention.
The meeting coincides with the 16th anniversary of the party’s foundation.
Mr. Pawar, a three-time Chief Minister of Maharashtra, along with Tariq Anwar and P.A. Sangma had split from the Congress in 1999 on the issue of Sonia Gandhi’s foreign origin.
Speaking on the occasion, Pawar paid tributes to former Maharashtra Deputy Chief Minister R.R. Patil and former Rajya Sabha member Govindrao Adik who passed away recently.
“Their passing away is a personal loss to me and their contribution to strengthening the organisation will always be remembered,” he said.Around 700 delegates from different parts of the country are attending the convention.
Pawar, who is also a former Union Minister, said his party’s aim was to protect the interests and work for welfare of youth, women, minorities and the backward classes.“My priority in politics is rural development and agriculture growth,” the NCP Chief said.
Mr. Pawar, who is a Rajya Sabha MP, said his party was playing the role of constructive opposition as per the mandate of the people in last year’s Lok Sabha election and Assembly polls in Maharashtra.