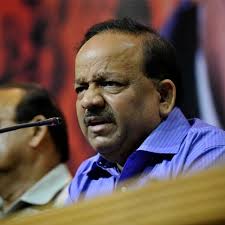 PATNA: Union Minister Harsh Vardhan on Saturday directed officials of All India Institute of Medical Sciences (AIIMS) here to complete the project ‘at any cost’ by this year end so that it can be inaugurated on December 25, the birthday of former prime minister Atal Bihari Vajpayee.
“I am directing the officials to work on war-footing and get this AIIMS ready by the end of the year at any cost. Prime Minister Narendra Modi will dedicate it to the nation on December 25 on the occasion of the birthday of Atal Bihari Vajpayee,” he told reporters here.
The date assumes significance as Vajpayee, during his tenure as the prime minister, had conceptualised the project in 2004 of having six more AIIMS in the country, including the one at Patna.Asked about the reasons behind the delay in completion of the AIIMS Patna project, even as the deadline for it was extended five times over the last couple of years, the Minister said he wants to look ahead and forget the past.
“My motto is to forget the past and look into the future. The country had another government for the last 10 years and so I will not comment on it,” Vardhan said.The Union Health Minister is in the city to take stock of the construction work of AIIMS.
Interacting with faculty members of the institute, he said researchers and faculty members could play a big role in countering diseases like Kala-azarand Acute Encephalitis Syndrome (AES).Vardhan will visit Muzaffarpur later in the day to inspect the situation prevailing there in the light of AES outbreak as around 130 children have succumbed to the disease and another 700 admitted in hospitals.
The disease has spread to nine districts till now, and has assumed epidemic proportions. Scientists have so far been unable to find out the reasons behind the disease, which mostly affects kids below the age of six years.

s below the age of six years.