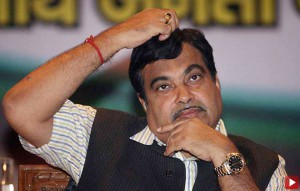 NEW DELHI: Union minister Nitin Gadkari today denied any wrongdoing as he confronted aggressive demands by the opposition in Parliament for his sacking over an auditor’s report that indicts a company linked to him. The Rajya Sabha was adjourned a record nine times over the protests.
“The report is being deliberately misinterpreted for political reasons,” Mr Gadkari said in the house.His attempts at a clarification were mostly drowned out by opposition protests, which led to multiple disruptions.
“Rules have been violated. The Prime Minister says he has zero tolerance for corruption. What is he doing now?” said Congress MP Anand Sharma.The protests against the minister are seen by the government as a strategy to stall its flagship Goods and Services Tax Bill, which has to be discussed in the upper house. It was passed by the Lok Sabha last week.
The Comptroller and Auditor General (CAG)’s report has alleged irregularities in a loan given by a government-run company to the Purti Group, in which Mr Gadkari owned stakes.
“The loan was returned. There was a one-time settlement. The CAG has nowhere named me as a wrongdoer nor there is any adverse comment against me,” Mr Gadkari said in his statement, adding that he has not been associated with the company since 2011.
With a united opposition targeting Mr Gadkari and only three days left for key legislation, the government asked the minister to make a statement in the house, but that hardly helped.
As a constitutional amendment bill, GST needs the support of two-thirds of the House and the government will need the support of opposition parties.
The ruling BJP has been able to split the opposition, winning the support of regional parties that rule states, including the Trinamool Congress, Samajwadi Party and the Biju Janata Dal. The Bahujan Samaj Party, too, supports the bill.
The Congress, say sources, believes that its biggest bet to stall business is to rally support against Mr Gadkari.