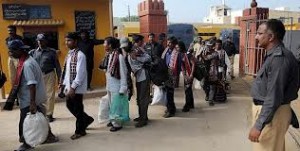 VADODRA: Pakistan Government has decided to release 152 Indian fishermen on 26 May, the day Narendra Modi will take oath as Prime Minister in presence of Nawaz Sharif and other heads of SAARC countries.
A team from Gujarat has been sent to receive them on the Wagah border in Punjab, a senior state government official said. A team of officials from State Fisheries department has been dispatched to receive them at the Wagah border on Monday, Chief Fisheries Commissioner P L Darbar told PTI by phone.
“We received a communication from the Union Home Ministry that 152 Indian fishermen (most of them from Gujarat) will be released by Pakistan on 26 May. Accordingly, we have sent a team to make all necessary arrangements to received them,” he said.
The fishermen will be brought to Veraval town in Gir Somnath district from where they will leave for their native places, Darbar said.According to department officials, the fishermen hail from various parts of Gujarat, Daman and Diu, Dadra and Nagar Haveli and other cities of the country. They were captured by Pakistani marine authorities for allegedly entering into their territorial waters.
The head of a Karachi-based NGO, Pakistani Fish Forum, Mohammed Ali Shah, told that the move was a good gesture by Islamabad to improve bilateral ties. The decision comes on the eve of swearing-in of Narendra Modi as Prime Minister, an event which will also be attended by Pakistan Premier Nawaz Sharif.