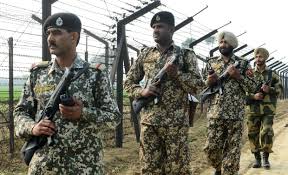 NEW DELHI : Pakistan today summoned India’s acting high commissioner in Islamabad to protest against the killing of an “inadvertent crosser” by Indian troops at the border.
A statement from Pakistan said the man, Touqeer, was cutting grass at an area in Narowal when he and two others inadvertently crossed the International Border and were fired at by the Border Security Force or BSF.
“Indian BSF troops fired without any warning, injuring Touqeer, while the other two managed to return. Immediately, a Company Commander level contact was established by Pakistan Rangers to take over the injured Pakistani, but the BSF troops refused and took the injured across the fence. Later, he passed away in the custody of BSF troops,” said the statement.
Accusing Indian soldiers of violating Border Ground Rules, Pakistan said India “must respect the lives of civilians and refrain from indiscriminate firing, which has caused loss of precious human lives.”
Islamabad claimed another civilian, Muhammad Din, was killed by Indian troops in Rawlakot near the Line of Control. It said in August, a BSF soldier who had also crossed over by mistake “was treated well by Pakistani troops and returned safely as a gesture of goodwill.”
Around 20 people have died on both sides of the border in recent cross-border firing. India has accused Pakistan of unprovoked firing and shelling to distract its troops and help militants cross over to Jammu and Kashmir.