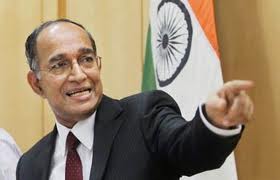 NEW DELHI : Paid news should be made an electoral offence that attracts disqualification so that it acts as a deterrent, Chief Election Commissioner V S Sampath today suggested and said inadequacies in legal framework were not allowing the poll panel to effectively check this and other malpractices.
He also said that there is a “crying need” for a “well defined legislation” governing expenditure of political parties during elections as its absence was allowing them and their candidates to circumvent the rules.
Sampath, who was speaking at a session organised by the Law Commission, said that when the Election Commission looked into whether it had the powers to deal with paid news it found the “answer was negative.”
He said that ‘paid news’ in whatever form or nomenclature is presently not even an electoral offence.”If it is an electoral offence, it can eventually lead to the disqualification of the candidate. Whatever the difficulties of implementation, the very fact that if it is listed as electoral offence, it would act as a deterrent against people using it in the elections,” he said.The CEC said that a recommendation in this regard has been made to the Law Ministry.
He even wondered why the government advertisements during elections should not be considered as paid news.Paid news not being an electoral offence, he said, EC now tries to check this menace by invoking its powers related to candidates’ spending. He said that if a candidate is caught, the amount is added to the candidate’s expenditure.
He, however, claimed that when caught, the candidates have found their own way to wriggle out of it.”When they (candidates) file their expenditure returns, they always build a cushion for this kind of things. If Rs 40 lakh those days was the limit, invariably no candidate would file a return for more than Rs 25 lakh. That 15 lakh will be the cushion for this,” Sampath said.
He said that the EC catches instances of paid news but it is like “they were paying some traffic fine, and they will do that and continue with the journey merrily”.The CEC also said that while the Commission’s control over a candidate’s spending is only after he files his nomination, people make substantial election related expenses before that.
“We have a case in Haryana, where a day before the filing of the nomination, a candidate organised a rally in which he was reported to have spent Rs 1.5 crore. Everybody, the whole world knows that he is the candidate. Somebody complains take action against him, you can’t….Only from the day he files his nomination we can start looking at his expenditure,” the CEC said.He added that people start spending but the Election Commission is constrained “because of the law and the interpretation of the law.”
He said that law says that EC can hold an election within the period of six months before the due date.”We have been making proposals on so many occasions. Why should not the Commission have powers to ensure the purity of the election during this six-month period,” he said.
Sampath said that advertisements or paid news by political parties is one thing, advertisements given by government during this period “is also paid news”.The CEC said that there are many complaints but “the reality is you really can’t do much about these things.He noted that all limits for poll expenditure is for candidates and none for political parties.

He said that recently the Commission had tried to come out with some transparency guidelines. He said in countries like the US, expenditure commissions only take care of the expenditure and how political parties raise finance.

“There should be a well defined law regulating opinion polls also,” the CEC said.

He noted that there is a view that voters will not be swayed by opinion polls but added that that there were instances where candidates won by wafer thin margins.

Later, he was asked why during elections when polling was on in one area, poll related news from other areas continued to be shown on electronic media or internet.

Sampath replied that there is a mismatch between law and electronic revolution.

“On every poll day during this Lok Sabha election, this violation has taken place. It is because of mismatch between law and electronic revolution in the country. All our laws did not take in to account electronic revolution,” he said, adding that EC has to abide by the law as it exists.

“What you are saying is no election matter displaying in electronic media or any other media during that 48-hour period. So we only went by the provisions of the law and….If it happens in any of the polls going areas,” he added.

He said that if anything was happening in poll bound areas, the Commission acted.

“Brazenly people knew the loophole in the law, they will go outside that and electronic media used to tell us. No, we don’t have the technology to restrict the display in your poll going areas, and I knew, even if we had taken action against electronic media on that, they would have again gone back to the court.

“They would have asked us a question, do you have any technology to stop in only those areas, when we would have to grin and say we don’t have. Then why are you taking action against these people?” he said.

He was asked why the restriction was applicable only on electronic media when print media could print election related material including advertisements even on the day of the polling.

“For twenty years we have been writing to the law ministry, saying you either have that or you remove for both. If they have the freedom to do it. The problem with the print media is, electronic media it is only a blip on the screen. Whereas print media, it stays….News published about a candidate that morning, there’s nothing you can do.”

Asked if the law ministry had not replied to the Election Commission for “twenty years”, he quipped “this is not the only case.”