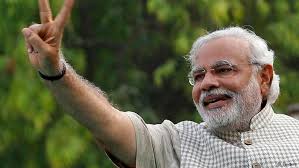 NEW DELHI : Several US policy experts, including a former key Clinton administration official, see the upcoming US visit of Indian Prime Minister Narendra Modi as an opportunity to take India-US ties to the next level.The Obama administration sees the recent election of Modi-led majority government in India “as an opportunity to take the relationship to the next level,” writes Strobe Talbott president of the Brookings Institution, who served as President Bill Clinton’s deputy secretary of state.
India`s Prime Minister Narendra Modi will on Friday begin his first visit to the United States, seeking to promote his country as open for business and to mend ties after a bitter diplomatic row last year.Washington is preparing a lavish welcome for Modi in a transformation of fortunes for a man it refused a visa in 2005, and only began to engage with shortly before he came to power in May.
India`s new leader will enjoy a private dinner with Barack Obama ahead of official talks with the US president on Tuesday — although only tea and lemonade are expected to pass his lips as the visit coincides with a religious fast he observes every year.
He will also meet a raft of top US leaders including Defence Secretary Chuck Hagel and Secretary of State John Kerry, as well as his predecessor Hillary Clinton, favourite to be the next Democratic presidential candidate.
Both sides are eager to repair the damage inflicted by a recent series of spats, including a crisis last December when US authorities arrested and then strip-searched an Indian diplomat in New York for allegedly mistreating her housekeeper.But Modi, who led his Hindu nationalist Bharatiya Janata Party (BJP) to a crushing victory on a promise to revive India`s flagging economic fortunes, is expected to focus firmly on business opportunities.
On Monday, he will meet top company leaders including Google`s Eric Schmidt and PepsiCo`s Indra Nooyi as he seeks to attract global businesses to invest in India.The government is anxious to create jobs for the millions of Indians who enter the employment market each year, and Modi heads to the US a day after launching an ambitious push to make the country a global manufacturing hub.
Former deputy US trade representative Susan Esserman said Modi`s election marked a dramatic departure from the “ambivalence” towards business shown by previous Indian administrations.”With the election of Modi we see a new era, a dramatic change in approach, with his full-throated embrace of business and foreign direct investment as key to economic growth and his agenda,” she said during a recent briefing at the Center for Strategic and International Studies in Washington.
“We have never before seen an Indian prime minister`s visit so heavily business-oriented and so packed with meetings with the US business community.”
Modi`s new government has already relaxed rules on inward investment in key industries including defence.However, critics say New Delhi`s recent move to block a key World Trade Organization pact that would streamline customs procedures and boost global commerce undermines its strong message on business.The row over the WTO is likely to be on the agenda when Modi meets key leaders in Washington next week.
Indian foreign ministry spokesman Syed Akbaruddin said the two sides would also discuss the future of Afghanistan and the global fight against militant groups such as Al-Qaeda and the Islamic State.The United States is eager to cultivate relations with India, which it sees as a democratic counterweight to Asia`s other emerging power, China.Modi has already visited Japan and hosted China`s President Xi Jinping since taking office.
Despite being denied a visa over charges he failed to prevent anti-Muslim violence in Gujarat when he was the state`s chief minister, Modi, who has always denied any wrong-doing, has said the US and India are natural allies.In an interview with CNN last week he acknowledged there had been “ups and downs” in relations but that both countries “are bound together, by history and culture”.Modi will on Sunday address people of Indian origin at Madison Square Garden, the 18,200-capacity Manhattan arena that is home to the New York Knicks and more commonly associated with rock stars than foreign dignitaries.
The event was organised by Indian American groups that are eager to show a rousing welcome for Modi after his past cold shoulder from Washington.While foreign leaders frequently address their communities in the United States, the scale of Modi`s appearance is unusual.
Modi`s predecessors Manmohan Singh and Atal Behari Vajpayee held receptions with the Indian community, but chose hotel ballrooms instead of giant public spaces.While in New York, the premier will also meet UN Secretary General Ban Ki-moon and deliver a maiden speech to the UN General Assembly on Saturday.Akbaruddin said Modi would discuss India`s long-held ambition to gain a permanent seat on the UN Security Council and outline its approach to the world body`s post-2015 development agenda.