PATNAL: Senior BJP leader Sushil Kumar Modi on Tuesday said over 50 legislators from Bihar’s ruling Janata Dal-United are in touch with his party as they are unhappy with the chief ministerThe Nitish Kumar government would fall due to internal contradictions after the end of Lok Sabha polls, said the Bharatiya Janata Party leader and former deputy chief minister. 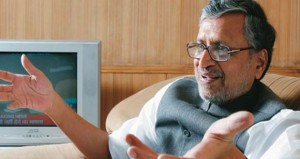 “Over 50 JD-U legislators are in touch with the BJP because they are unhappy with Nitish Kumar. They are also helping BJP candidates in polls to ensure their victory,” he said. Sushil Kumar Modi said most of the JD-U’s 116 legislators were against Nitish Kumar’s decision last year to end the alliance with the BJP.However, Modi made it clear that the BJP would not do anything or make any attempt to cause the fall of the state government. “This government will fall due to its own contradictions,” he said. Last week during campaigning in Bihar, BJP leader and Madhya Pradesh Chief Minister Shivraj Singh Chauhan predicted that the Nitish Kumar government would fall after the Lok Sabha polls.
Earlier, another senior BJP leader, Ashwani Kumar Choubey, said the state government would not survive after 21 May. Speculation is rife that if the JD-U performs poorly in the Lok Sabha polls, it is bound to impact the state government.According to JD-U leaders, some BJP leaders have been instructed by the party’s prime ministerial candidate Narendra Modi to disturb the state government after the polls. ”But we are confident that the poll outcome will prove wrong and the JD-U will perform better than expected,” said a JD-U leader close to the chief minister.
In 2009, the JD-U won 20 of 40 Lok Sabha seats from Bihar and its then ally the BJP won 12 seats. While the Rashtriya Janata Dal (RJD) bagged 4 seats, the Congress and independent candidates shared two seats each.