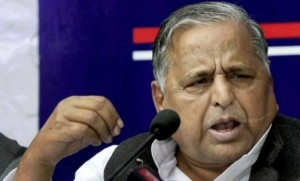 NEW DELHI : Opposition Wednesday lambasted the government in the Lok Sabha for making “tall promises” which were “difficult to achieve” to garner votes and asked the BJP-led ruling dispensation to explain how they would fulfill the aspirations of the people.
“I am just warning you (government). You should not be so arrogant. We have earlier seen such electoral victory and have fought those governments too — whether of Indira Gandhi or Rajiv Gandhi. We fought all of them. I am just reminding you,” Samajwadi Party chief Mulayam Singh Yadav said.
Speaking on the Motion of Thanks to the President for his address, Yadav said, “We fought the imposition of Emergency. After 1971, we saw 1977 (when Indira Gandhi was defeated by Janata Party). We also saw 1984 when Rajiv Gandhi stormed to power after Indira Gandhi’s assassination and then saw 1989 (when Congress was ousted).”
Amid interruptions from the treasury benches as he took the BJP to task on its poll promises, the SP chief said, “You have made tall promises on several issues. You have even promised to take back Pakistan-occupied Kashmir and the territory taken over by China. Tell us by when will you do this. We will support you.”
Referring to Prime Minister Narendra Modi’s recent meeting with his Pakistani counterpart Nawaz Sharif, Yadav said, “Did you ask him to return the land (PoK)? What were the issues you discussed? Will you keep it a secret or inform Parliament?”He and senior Congress leader Amarinder Singh also took the government to task for making “tall” promises to contain price rise and unemployment, with Yadav claiming that “since your government has come to power, prices have gone up again and we thought you will fulfill the promise of ending inflation.”
BJP has also promised pucca houses for all in ten years “but how will you implement it, we want to know. You have raised the people’s expectations very high, but how will you meet them?”, the SP supremo said, as he was repeatedly interrupted by BJP members.Speaker Sumitra Mahajan had to ask members from the treasury benches several times not to disrupt Yadav’s speech.
Turning to the issue of women’s empowerment, Swaraj said the passage of the women’s reservation bill should become the milestone for the 16th Lok Sabha.
Noting that BJP had helped Congress in the passage of the measure four years back in the Rajya Sabha, she wanted Congress to reciprocate now and got instant support from Leader of the Congress Mallikarjun Kharge.The External Affairs Minister said with the advent of BJP-led NDA to power, the stature of India has grown overnight globally.Earlier there was talk internationally that the India’s growth story was over but now it is said the potential has returned.
“There is a race for world leaders to come to India and also invite Modi to their countries. They want to participate in our growth story and we also want to take advantage of it. These are good signs,” she said.With the Opposition alleging BJP is “reeking of arrogance” after victory, Swaraj said, “The massive victory has also brought big responsibility and we accept the verdict with humility.”
Swaraj said the BJP-led NDA will take lessons from the mistakes of the past government which was thrown out due to a variety of reasons including price rise, growing corruption, a series of scams, plight of farmers, sagging business and industry, unemployment among youth, atrocities against women, degradation of institutions and injustice to soldiers.
She also said the Centre did not believe in confrontations with the states and was for building ‘Team India’ where the Centre and states could have harmonious relations.