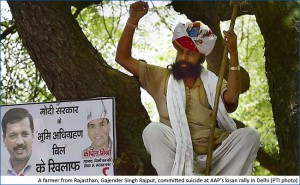 An angry Opposition today demanded a statement from Prime Minister Narendra Modi in Parliament on the death of a farmer who hanged himself from a tree at an Aam Aadmi Party rally in Delhi on Tuesday. Delhi Police is investigating whether the death was a suicide or an accident.
The PM should make a statement in the floor of a House,” said Congress’ Ghulam Nabi Azad amid noisy protests in Rajya Sabha which reconvened today for the second half of the Budget session.
Similar demands were made in the Lok Sabha during a discussion on the issue.
“This isn’t suicide, this is homicide and the culpability lies with the government… Request the PM to come out of Twitter and see the ground reality,” said CPI’s MB Rajesh.
Yesterday, the PM, in a tweet, condoled the farmer’s death, saying it had “saddened the nation”.Gajendra, 41, climbed a tree and hanged himself on Wednesday afternoon as hundreds watched in horror.
Delhi Police has filed a case for abetment to suicide. A Crime Branch team today visited Gajendra Singh’s home at his village in Dausa where he was cremated today.
The police are scanning video footage of the incident to see whether anyone in the crowd goaded Gajendra or tried to stop policemen from saving him. Cops are also checking his mobile phone records. The Delhi Police today submitted a report to the Home Ministry on the issue.
Earlier in the day, activists of the youth Congress protested outside the residence of Delhi Chief Minister Arvind Kejriwal, who has been severely criticised for continuing with the rally even after the man’s death.
Mr Kejriwal and his party have accused the police of doing nothing to save the man. There were layers of policemen at the rally and a few metres from the tree where the farmer hanged himself, sat Mr Kejriwal and other AAP leaders.
Before killing himself, Gajendra Singh from Dausa district even flung what was perceived as a suicide note at the crowd, in which he had written: “I am a farmer’s son. My father drove me out of the house because my crop failed. I have three children. I am from Rajasthan. Please tell me, how do I go home? Jai Jawan, Jai Kisan.”
Gajendra’s family can’t believe that he could have committed suicide. Villagers say the family owns 17 bighas (seven acres) of land and had not suffered major crop loss.