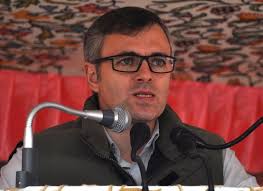 NEW DELHI: With the BJP appearing keen to lead the next government in Jammu and Kashmir, the party has begun hectic parleys with key political players in the state.
As part of the process, former chief minister Omar Abdullah met BJP president Amit Shah, Finance Minister Arun Jaitley and party general secretary Ram Madhav in Delhi today.Though both sides are tight-lipped on what transpired at the meeting, the development is significant given the way numbers are stacked up in the state assembly.
In the 87-member House, PDP bagged 28 seats, BJP got 25 seats, National Conference 15, Congress 12 and Others 7.If the BJP gets NC’s support and of the Independents, then it can reach the magic figure of 44.
Reports said Omar Abdullah has postponed his visit to UK given the rapidly changing political dynamics in the state.However, he later took to Twitter to denied the report.