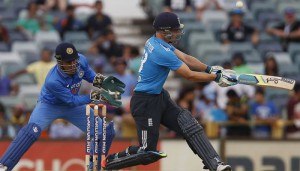 PERTH: India were on Friday knocked out of the tri-series cricket tournament after yet another spineless display as England recovered from a top-order collapse to record a three-wicket victory and secure a place in the final here today.
In a do-or-die game, India’s batsmen let the team down badly as they frittered away a good start to be bundled out for 200 in 48.1 overs, losing as many as nine wickets for 97 runs from a relatively comfortable 103 for one.England were tottering at 66 for five at one stage but staged a gritty fightback through James Taylor (82) and Jos Buttler (67) as their stand steered the team home with 19 balls to spare at the WACA ground. England will now take on Australia in the final on Sunday.
It was yet another disappointing show by the Indians, who have now failed to win a single international match during their ongoing tour of Australia.The tournament, which served as a dress rehearsal for the upcoming ICC Cricket World Cup, has shown that there are lot of chinks in defending champions’ armoury as they lost three out of the four matches while one was abandoned.
While it a mixture of variable bounce and poor application which resulted in India’s batting downfall, it was Ajinkya Rahane, who some what proved to be a saving grace with a patient knock of 73 as his teammates did not show the stomach for a fight.
On the otherhand, it was diminutive Taylor alongwith the flashy wicketkeeper batsman Buttler, who showed a lot of resolve despite losing the top five as their 125-run partnership guided Eoin Morgan’s team home.Taylor hit only four boundaries in his 122 ball innings but played the role of a sheet anchor to perfection. Buttler had seven fours in 77 balls to his credit.
While Stuart Binny (3/33) is slowly making a case for himself in the starting XI with three top-order wickets, India’s bowling line-up is yet to bear a settled look and inspire confidence as they are set to begin the Cup defence in hardly two weeks’ time.Earlier, India’s uninspiring batting show continued as save Rahane, none of the other batsmen were able to sciore a half-century with England’s seamers doing a good job to make a comeback after a decent opening stand.
Steven Finn (3/36) was the pick of the bowlers while Chris Woakes (2/47), Stuart Broad (2/56) and spinner Moeen Ali (2/35) claimed two scalps each after inviting India to bat.Out-of-form Shikhar Dhawan (38) and Rahane got off to a slow start but they batted to a plan, rotating the strike to good effect and slowly the runs started coming, albeit in a tickle as the first 10 overs yielded only 34 runs.
Thereafter Rahane looked in good touch, as the openers brought up their 50-run stand in the 14th over. Even Dhawan play some good shots after spending time at the crease, cutting and driving with much more ease.But he couldn’t go on, and edged one to Jos Buttler behind the stumps off Woakes in the 21st over. The scorecard read 83 for one at that time.
Rahane got to his eighth ODI fifty in the 25th over and though he tried to play some expansive strokes, he realised the need to hold one end up soon enough.England tightened up their bowling and their good fielding started paying dividends. Virat Kohli (8), who had come in to bat at number three, was the next to depart as he attemped a big shot off Ali only for Root to take a good running catch at long off.
Ali returned for his next over and got rid of SureshRaina (1), who played a horrendous stroke. The left-hander danced down the track, going for a big shot, only to be caught at backward point.Ambati Rayudu (12) added 27 runs for the fourth wicket with Rahane but he never looked settled at the crease. He was out just before the batting powerplay was due, in the 35th over, caught behind off Broad.
The big blow came when Rahane was dismissed in the very first powerplay over, trying to work Finn down to third man, but ended up caught behind.India also lost Stuart Binny (7) in the powerplay’s final over, caught brilliantly at first slip by a diving Ian Bell off Finn again. Those five overs yielded only 23 runs.
Skipper Mahendra Singh Dhoni (17) tried to stay at the wicket for the final 10 overs but he was finally out LBW to James Anderson (1-24) in the 43rd over.Ravindra Jadeja (5) played a rash stroke while Axar Patel (1) is still yet to come to terms with conditions in Australia as far as his batting is concerned.
India only managed to cross the 150-mark in the 39th over and were struggling at 165/9 before a 35-run partnership for the final wicket between Mohammad Shami (25) and Mohit Sharma (7) helped gain a little respectability to the total.Shami threw his bat around and was the last to be dismissed in the 49th over, caught behind off a slower delivery by Woakes.