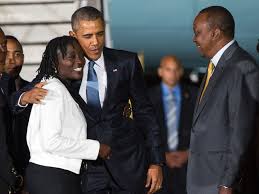 WASHINGTON: US President Barack Obama had a big family reunion when he arrived in Kenya on Friday.Obama, who’s visiting his father’s homeland for the first time as president, met three-dozen members of his Kenyan family for dinner at his hotel and sat down with his half-sister Auma and step-grandmother Sarah Obama, who was the third wife of the president’s paternal grandfather, ABC News reported. Obama refers to her simply as Granny.
Meanwhile, Auma, who had picked up the POTUS back in 1988, during his very first visit from the airport, was one of the first to greet him when he arrived at the Jobo Kenyatta International Airport. 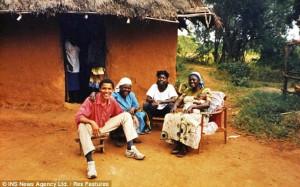 Obama with Auma back in the day in Kenya. Image Source: TwitterHowever, Obama won’t be able to visit Kogelo, the village where his father was born and buried, due to his busy schedule.
The President will spend two days in Kenya before travelling to Ethiopia on Sunday. It will be his first time a sitting US president had visited either country.