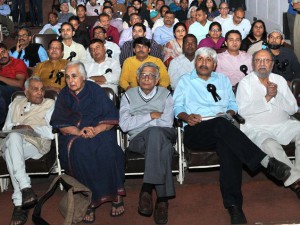 NEW DELHI: Intellectuals, scholars, academics, authors, scientists and artists gathered here on Sunday and called upon President Pranab Mukherjee to advise the government to ensure the freedom of life, faith and expression.
The occasion was “Pratirodh” (resistance), organised on the birth anniversary of rationalist Narendra Dabholkar, who was murdered in Pune in August 2013. “Pratirodh” was organised to raise a voice “in protest and in resistance” as the eminent citizens sense growing violence and intolerance and the undermining of pluralism.

The writers’ protest, which began in September after eminent scholar M.M. Kalburgi was gunned down in Karnataka, strengthened after Prime Minister Narendra Modi remained silent on the Dadri lynching.
“Pehle Babri, phir Dadri aur ab Hindutva ke naam par Bahaduri, [First Babri, then Dadri, and now ‘valour’ in the name of Hindutva],” Krishna Sobti, a Hindi writer, said.
The nonagenarian writer, who returned her Sahitya Akademi award and fellowship in October, spoke about her Freedom Struggle days in the 1940s and how the echoes of “Azadi” slogans were still vivid. “But we didn’t know we were fighting for this.
Our country is fast becoming intolerant towards minorities, their beliefs and values.”She said it was disturbing to hear that the government was concerned about the population growth of minorities. “They are upset that Muslims, Christians and Sikhs are growing in numbers. But they forget that Hindus were/are in majority.”
Eminent historian Romila Thapar said she had twice refused awards during the Congress’s rule, and those asking “Why now” should know that many such people had protested against issues such as the Emergency, the killing of Sikhs and the fatwa against Salman Rushdie.
Ms. Thapar said that when she was in Mumbai to deliver a lecture on secularism, she needed police protection, first time after 68 years of Independence.
“Police officials feared my face will be smeared with ink. Why? Because I was going to speak on secularism.” She asked Mr. Modi to focus on “essential needs” and postpone “smart cities” and ‘bullet trains’ projects.In his speech, historian Irfan Habib said, “…There is not much difference between Islamic State (IS) and the RSS as far as intellect goes.”