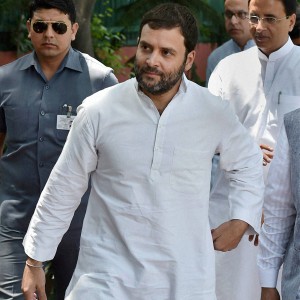 NEW DELHI: “Today is not a day of politics. We will talk tomorrow,” he merely said, when asked by reporters on his reaction to the Prime Minister address on Independence Day.
Sonia Gandhi too steered clear of any questions and merely greeted reporters on Independence Day.
They were interacting with the media after the Congress President unfurled the national flag at the AICC headquarters.
In his address to the nation, the Prime Minister, while underlining India’s unity and diversity, said the poison of casteism and communal frenzy have no place and asserted that steps taken by his government in the last 15 months to deal with the “termite” of corruption had started yielding results.
“There is a lot of talk in our country about corruption.It is like a sick person giving suggestions to others on how to remain healthy, there are people who are themselves corrupt, who give suggestions on how to deal with corruption,” he said.
At the flag hoisting at AICC headquarters, former Prime Minister Manmohan Singh, Leader of Opposition in Rajya Sabha Ghulam Nabi Azad, P Chidambaram and several party leaders including general secretary Janardhan Dwivedi, Gurudas Kamat, C P Joshi were present.
After the unfurling of the flag, the Congress chief distributed sweets to children.
Rahul Gandhi is leading the Congress campaign against the government on the Lalit Modi controversy and Vyapam issues in which it is seeking the resignation of Union Minister Sushma Swaraj and chief ministers of Rajasthan and Madhya Pradesh Vasundhara Raje and Shivraj Singh Chouhan.