SEOUL: A top-ranking North Korean military official has threatened a nuclear strike on the White House and Pentagon after accusing Washington of raising military tensions on the Korean peninsula.The threat came from Hwang Pyong-So, director of the military’s General Political Bureau, during a speech to a large military rally in Pyongyang on Sunday o 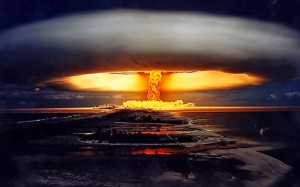 n the anniversary of the armistice that ended the 1950-53 Korean War.
Hwang, who holds the rank of vice marshal in the Korean People’s Army, said a recent series of South Korea-US military drills, one of which included the deployment of a nuclear-powered US aircraft carrier, had ramped up tensions.”If the US imperialists threaten our sovereignty and survival… our troops will fire our nuclear-armed rockets at the White House and the Pentagon — the sources of all evil,” Hwang said in his speech broadcast Monday on state television.
It is not the first time that North Korea’s bellicose rhetoric has included threats of nuclear strikes on the continental United States and US bases in the Pacific.But most experts believe it is still a long way from developing a viable intercontinental ballistic missile with the required range.The North has conducted three nuclear tests, but is not thought to have mastered the miniaturisation techniques necessary for mounting a warhead on a missile.
It does possess a range of short-and mid-range missiles capable of striking South Korea and Japan, and has conducted a series of test firings into the Sea of Japan (East Sea) in recent weeks.The latest test on Saturday — guided by the leader Kim Jong-Un — simulated a short-range missile strike on South Korea where 28,500 US troops are stationed, the North’s state media said.
It defied censure by the UN Security Council which officially condemned Pyongyang on July 17 over the recent tests as violations of UN resolutions prohibiting the North from using ballistic missile technology.