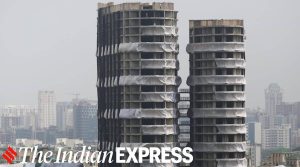 A: The Supertech Twin Towers were demolished in a matter of seconds today using modern engineering. A huge balloon of dust was seen on the spot as soon as both the towers were demolished. It took 12 seconds to raze Supertech twin towers in Noida to the ground on Sunday, said Jet Demolitions Managing Director Joe Brinkmann.While the Noida Supertech twin towers’ demolition largely remained successful, a boundary wall of a nearby residential society suffered damage while windowpanes of several apartments developed cracks.
As a series of controlled explosions reduced the 100-metre tall twin towers in Noida to a pile of rubble, residents heaved a sigh of relief after officials declared that there appeared to be no damage to the buildings adjacent to the structures that were brought down.
Noida twin towers demolition: Around 500 police and traffic personnel besides the Provincial Armed Constabulary (PAC) have been deployed as the area around Supertech’s twin towers was put out of bounds for civilians ahead of Sunday’s planned demolition of the structures. Road diversions were put in place early in the morning, as the evacuation of all residents from the two adjoining housing societies of Emerald Court and ATS Village in Sector 93A was completed around 8 am.Twin Tower will fly as soon as this green button is pressed, Black Box installed for data

Supertech’s Apex and Ceyane towers were razed down in pursuance of a Supreme Court order that found their construction within the Emerald Court society premises in violation of norms. Edifice Engineering, which is undertaking the demolition with its South African partner Jet Demolitions, has assured neighbours that there will be no damage to their buildings.
The residents of the nearby buildings who were evacuated before demolition have been allowed to enter their societies after obtaining permission from concerned authorities in Noida. Gas supply in the areas near the Supertech twin towers has been resumed. According to reports, no major damage of pipeline has been reported after the demolition of the 100-metre-tall towers.
Homebuyers who have invested in Supertech’s other projects across the NCR wondered “who actually got punished” as they are clueless whether they would get possession of their flats booked years ago. The demolition of Supertech’s twin towers in Noida is a lesson for all stakeholders in the real estate industry that accountability will be fixed if they violate building laws,Noida Authority CEO Ritu Maheshwari said, “10 metres boundary wall of a nearby society, ATS has been damaged after being hit by the debris. No information of damage from anywhere other that this has been received.”

“Pre and post-demolition AQI data is almost the same. Around 7pm, the residents of nearby vacated societies will be allowed to go back to their homes. Around 100 water tankers and 300 cleaning staff have been deployed here.” “The planned demolition of SupertechTwinTowers was successfully done at 2:30pm. The cleaning work has started and supplies restoration will start soon. AQI (Air Quality Index) is being monitored and we will release the data in a while.”
Supertech says it lost ₹500 croreRealty firm Supertech Ltd has incurred a loss of about ₹500 crore, including construction and interest costs, because of the demolition of its twin towers in Noida, the company’s Chairman R K Arora said today.
(With Local Inputs).