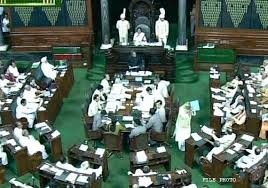 NEW DELHI : Speaker Sumitra Mahajan has come up against a peculiar problem while attempting to allot seats in the newly elected 16th Lok Sabha. According to sources no  party reportedly wants to sit right next to the Congress contingent.At least five political parties have refused to share benches in the House with Congress member.
The AIADMK, Trinamool Congress, Biju Janata Dal, Telangana Rashtra Samiti and the YSR Congress have allegedly said that their political positioning is equidistant from the BJP and the Congress and that must be reflected in the way they are seated.
Mamata Banerjee’s Trinamool Congress, till only a few years ago, sat cheek and jowl with the Congress in the treasury benches as part of the UPA government. But those were the days when the Congress had over 200 MPs. Now, it has 44, its lowest tally ever, and does not even meet technical qualifications for a Leader of Opposition in the 543-member Lok Sabha.
Sources said the benches next to the Congress’, which as chief opposition sits on the extreme left of the Speaker, were earmarked for Naveen Patnaik’s Biju Janata Dal. The BJD, which decimated the Congress in Odisha to win its 20 seats, reportedly flatly refused. And then so did the other four.
J Jayalalithaa’s AIADMK with 37 MPs, the Trinamool Congress with 34 and the BJD are the largest teams in the house after the Congress. With the BJP-led NDA taking up many more than half the seats in the semi-circular arrangement, the Speaker is not left with much space to meet those demands. In the fickle world of politics, the ruling BJP has been where the Congress is now. The party, which has 280 members in the Lok Sabha, once had to scout for neighbours to sit with too.
There has also been some heartburn over the allocation of front row seats – seen as a status symbol. The Congress wanted four, but numerically only qualified for two. The government has decided not to give it one more of the 20 seats.