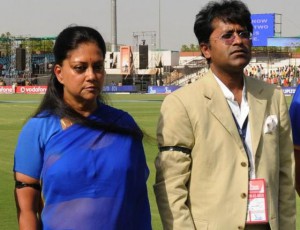 JAIPUR: Chief Minister Vasundhara Raje may have to  fend for herself in a scandal around corruption-tainted cricket boss Lalit Modi. A top source in Mrs Raje’s party, the BJP,  told NDTV that if the politician did offer a secret statement backing Mr Modi’s appeal for immigration to the UK, she could be guilty of an offense that mandates her resignation.
Mr Modi is wanted in several cases of corruption, money-laundering and tax evasion in India. He left India for London in 2010, beleaguered by a series of allegations of financial wrongdoing linked to the multi-million Indian Premier League (IPL) that he created.
In a recent interview, Mr Modi claimed that  in 2011, Mrs Raje, who he describes as a close family friend, provided a document in court in support of his appeal for UK citizenship. Mr Modi says that the document had a confidentiality clause to protect Mrs Raje. His revelation about her alleged backing are seen as the result of a falling out a few years ago.In Delhi, no senior leader has supported Mrs Raje. BJP law-maker Chandan Mitra told NDTV last night, “Mrs Raje herself needs to clarify this issue till that is done, we from the outside cannot possibly comment.”
But in an example of the BJP’s predicament, its  leaders in Rajasthan like state president Ashok Purnami firmly backed Mrs Raje. Her considerable charisma and hold over the party in her home state helped return the BJP to power in 2013, a factor that is being considered by the BJP in Delhi as it contemplates strategy in the scandal.

The BJP has already been seared with the disclosure that Foreign Minister Sushma Swaraj intervened last year to urge UK officials to allow Mr Modi to travel to Portugal at a time when his passport had been revoked by India in connection with cases of graft. The BJP was quick and firm in its support of Mrs Swaraj.