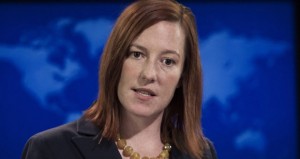 WASHINGTON: The US has said no further discussion with Iran has been planned on the Iraqi issue, where Islamic militants have gained controlled of key cities.On the margins of the P5+1 meeting in Vienna with Iran on its nuclear weapons programme, Deputy Secretary of State, William Burns, met briefly with Iranians.
“It was a brief on the margins; it was separate from the discussions and the negotiations that are ongoing. They discussed the need to support inclusively in Iraq and the need to refrain from pressing a sectarian agenda,” State Department Spokesperson, Jen Psaki, told reporters.
“In terms of where we go from here, we’re open to continuing our engagement with the Iranians, just as we are engaging with other regional players on the threat posed by ISIL in Iraq. It is likely those discussions would happen at a lower level, and we don’t expect further conversations with Iran on this issue in Vienna. Those talks will focus on the nuclear issue for the remainder of the week,” Psaki said.
The State Department cautioned reporters from reading too much into the brief meeting.“We are engaging with a range of countries in the region who are concerned about the stability of Iraq and the impact on the region. That’s what this was, briefly on the margins. What it will mean moving forward I think is yet to be determined, but it’s not the launch of a formal process or anything along those lines,” she said.
Psaki reiterated that they are talking about military cooperation or military coordination.“In fact, we don’t think that the focus should be on the military component in Iraq. But clearly any country that can make the argument that there needs to be unity and the sectarian tensions that have been flaming in Iraq are harmful to the stability is one we would feel is useful. That is the message that was sent from our end,” she said.“There is a shared concern that they have expressed publicly about the stability of Iraq and the impact of ISIL That was the reason why there was a brief engagement on this yesterday,” she said.

“This is a country that also has a concern about the stability of Iraq, therefore we felt it made sense to have a discussion. How that takes place in the future we’ll determine in the future,” she added.