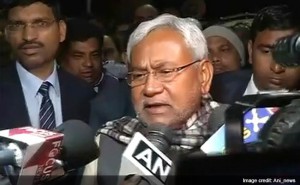 PATNA: In a major setback to former Bihar Chief Minister Nitish Kumar, the Patna High Court on Wednesday termed his recent election as the JD(U) legislative party leader unconstitutional.The High Court passed its order in response to a petition filed by Bihar Chief Minister Jitan Ram Manjhi’s loyalist JD(U) MLA Rajeshwar Raj challenging Nitish Kumar’s election as ‘illegal’.
In his petition, Raj had contended that JD(U) chief Sharad Yadav had illegally summoned a legislature party meeting, which elected Nitish Kumar as its new leader.Manjhi had also termed Yadav’s decision to call the meeting as illegal and questioned the election of the former chief minister as the new leader of Janata Dal (United) legislature party.
Bihar’s ruling JD-U later expelled Manjhi from the party for six years on disciplinary grounds.In a dramatic turn of events, Nitish Kumar and his supporters met Bihar Governor KN Tripathi and informed him that Manjhi no longer enjoyed support of majority MLAs so he should be immediately removed as Chief Minister of Bihar.
Nitish Kumar plans to parade 129 lawmakers for President Pranab Mukherjee in Delhi this evening. A court in Patna today said a letter by the Bihar Speaker declaring him leader of the Janata Dal (United) legislature party is illegal.The court acted on a petition filed by a supporter of current chief minister Jitan Kumar Manjhi, who has refused to make way for Nitish Kumar.
Mr Kumar is in Delhi to meet the President and prove that his claim to the post of Chief Minister of Bihar is indisputable. He landed in Delhi last evening with about 70 lawmakers from his party. Another batch of MLAs had landed in the capital earlier.
Over the weekend, the JD(U) had sacked Mr Manjhi as legislature party leader and elected Mr Kumar in his place to prepare for his return as the state’s chief minister. But Mr Manjhi has refused to resign, also contending that the meeting that elected Mr Kumar was “unconstitutional.”Mr Kumar has wanted to take a trust vote immediately to clear the path for his return as Bihar Chief Minister and had alleged that Governor KN Tripathi was denying him that right.
“We have presented everything to the Governor showing that we are eligible to form the government. But a delay in his decision is polluting the environment,” Mr Kumar said.Mr Manjhi was handpicked to be chief minister nine months ago by Nitish Kumar, who had stepped down owning responsibility for his party’s rout in the national elections at the hands of partner-turned-rival, the BJP.
Mr Manjhi has been expelled by the JD(U) for anti-party activities. After refusing to resign, he also met Prime Minister Narendra Modi, spurring allegations from the JD(U) that the BJP is conspiring to break the party ahead of the state elections later this year.A delay in a trust vote to test Mr Kumar’s strength will lead to opportunistic defections, the JD(U) has argued.
Mr Manjhi called a cabinet meeting on Tuesday to establish that he still calls the shots. Seven ministers showed up.
The JD(U) runs a minority government in Bihar supported by Lalu Prasad Yadav’s Rashtriya Janata Dal and the Congress.