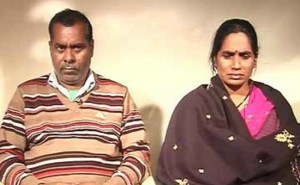 NEW DELHI:  Next month, the youngest of the six men who gang-raped and tortured a young student on a moving bus in Delhi in 2012, will walk free.
The parents of the woman have approached the National Human Rights Commission (NHRC) against his release, saying he is a threat to them as well as the society.
The “juvenile” was largely responsible for the death of their daughter and the “most brutal” of all the rapists, say the parents of the 23-year-old who came to be known widely as Nirbhaya or fearless.
Nirbhaya’s father has also demanded that the young man’s face be shown to the world.The convict, who was a juvenile or below 18 at the time of the horrific crime, was sentenced to three years in a reform home, a punishment that many said was disproportionate to the enormity of the offence.
Based on the parents’ complaint, the rights body has issued notices to the Centre and Delhi government.”They have submitted that such persons are threat to the life and liberty of the common man. There should be a mechanism to keep a strict check on them so that people are not subjected to any risk of being harmed.
The complainants have also stated that the rate of recidivism (committing crimes again) is fairly high,” said an NHRC statement.
The commission has asked the Delhi government whether the convict has been “recently subjected to psychological or psychiatric assessment for assessing his mental health.”
The parents want the government to prepare a plan to protect the citizens from such convicts after their release. They have cited laws in the US, Canada and other countries where the state is required to monitor and track sex offenders released into the community.
The Commission said:
“There is no doubt that the complainants have undergone extreme agony and pain after the incident of rape and murder of their daughter. The fears expressed by them need to be looked into”.
The parents had earlier written to Home Minister Rajnath Singh against the juvenile’s release.