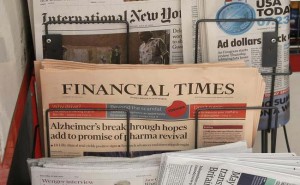 WASHINGTON: For about a year, senior executives at The Financial Times and its parent company, Pearson, had quietly discussed selling the respected, salmon-colored newspaper.
Bloomberg and Reuters were at various times seen as the favorites to buy it. By Thursday morning, however, it seemed all but certain that the German media company Axel Springer would close the deal. The Financial Times itself reported in a news story that Axel Springer was the leading candidate.
Then, to the shock of many inside The Financial Times’s newsroom, and in the publishing world more broadly, the Japanese media company Nikkei announced that it was the new owner of the 127-year-old paper, an institution in economic journalism and a prominent global brand.
The price was an eye-popping $1.3 billion, one of the biggest newspaper deals ever, dwarfing other recent sales. Two summers ago, The Washington Post sold for $250 million and The Boston Globe and its affiliated New England media assets sold for $70 million.
Axel Springer had been in talks until 15 minutes before the announcement of the sale to Nikkei, The Financial Times reported in a later story. Executives at Axel Springer did not return messages seeking comment Thursday, and Pearson and Financial Times executives declined to provide details.
The deal does not include Pearson’s 50 percent stake The Economist nor does it include the Financial Times’ central London building, which Nikkei will rent from Pearson.The price represents “a very good return for Pearson shareholders,” Pearson’s chief executive, John Fallon, said on a conference call for reporters Thursday. Pearson’s shares were up by about 1 percent Thursday.
Ken Doctor, a media analyst, said the price was almost anachronistic “from the heyday of newspaper sales, before the great recession and the ravages of digital disruption.”
“Yet because this is an international paper and there are only very few of those and they come up so rarely for sale, it is really uncharted water,” he said.”
The purchase highlights an increasing move toward globalization in the media. Based in Berlin, Axel Springer has been making investments and starting partnerships in global properties, including Politico, a Virginia-based political news organization.
The Guardian, the British newspaper and website, has long pursued a strategy built around robust global growth as domestic newspaper sales have generally dwindled.
The Huffington Post, a U.S. news website, which was recently valued by some of its own executives at $1 billion, has also been aggressively expanding around the world – as has BuzzFeed, a U.S. digital media company.
The media, Fallon said, has reached an inflection point as global audiences crave more information on their cellphones, and via social media. Pearson describes itself as the world’s largest education company, and its leadership, Fallon said, felt that “what The FT really needed was to be a part of an organization that in everything it does is completely and absolutely focused on journalism.”
When asked if that meant Pearson would also be selling its stake in The Economist and its 47 percent stake in the publisher Penguin Random House, Fallon said Pearson was not so closely involved in the management of those companies as it was with The Financial Times, but declined to comment further.
Bloomberg has long been rumored to covet The Economist. The company recently hired John Micklethwait, the former Economist editor, as editor-in-chief, and the magazine has long been a favorite of Bloomberg’s founder, former New York City Mayor Michael R. Bloomberg.
The sale would allow Pearson to intensify its focus on the educational publishing business, which provided about three-quarters of its profit last year.
Nikkei, which is privately held, is perhaps best known in the west for publishing the Nikkei 225 stock average. But it is also the proprietor of Nihon Keizai Shimbun, Japan’s largest business newspaper, with a print circulation of around 3 million and a paid online readership of more than 400,000, according to its website.
The company has long had an editorial partnership with The Financial Times, and its business extends beyond publishing, to broadcasting, events and data services. The Nikkei group earned 10 billion yen in net profit last year, a decrease of 10 percent from 2013, on revenues of 300 billion yen.
One indication of the company’s international ambitions was its creation of the Nikkei Asian Review, an English-language magazine and website, in 2013.The vast print circulations of Japanese newspapers have helped cushion them against the technological and financial challenges of the Internet age.
But perhaps as a result, online offerings have lagged, leaving Japanese publications vulnerable to shifting reader preferences. Even in Tokyo, print readership is declining, especially among the young, and many editors and publishers fear that their organizations lack the digital skills and experience to respond.

Doctor notes that Nikkei stands to learn from the Financial Times’ business model, which has healthy profit margins and a strong and growing business that is mainly digital.
The publication was early in putting content online and a pioneer of the metered paywall, a system by which readers can access a certain number of articles free, but then must subscribe to read further. Metered paywall systems have since been adopted by publications like The New York Times. The Financial Times has a combined paid print and digital circulation of 737,000.
In 2014, FT Group had sales of 334 million pounds, or about $520 million, and 24 million pounds of adjusted operating income.For all of its dominance in business reporting in Japan, Nikkei is seen by many as reluctant to sharply challenge the companies it covers. Corporate wrongdoing – be it financial scandals or the sale of unsafe products – is often reported elsewhere first, in weekly tabloids, for instance, that are less connected to the companies and officials that run Japan, or the foreign news media.
“If you’re a journalist at The FT, you’re going to be worried, but you would have been worried no matter who the buyer was,” said Claudio Aspesi, an analyst at Sanford C. Bernstein in London. “And this is better than some oligarch.”
“I think Nikkei understands that there is a culture at The FT that needs to be treated with care,” he said.”I doubt they’ll be as intrusive as some people fear.”On the conference call, Fallon and John Ridding, the FT Group’s chief executive, said repeatedly that they believed Nikkei understood the importance of editorial independence, though they had decided not to formalize the principle in a trust. The Economist has such a trust arrangement, which some see as an impediment to it selling.
In the Financial Times newsroom, the deal surprised many who had been steeled for a sale, but not to this particular buyer. Some responded with humor. “Japan,” the columnist Edward Luce said on Twitter, “is, like, totally my favorite country.”
Ridding said that one selling point was the idea that The Financial Times had “significant growth potential, particularly in Asia and the U.S.” On Twitter, Robert Armstrong, head of Financial Times’ Lex column, said Nikkei paid about “$2.4m per FT journalist. A goddamn bargain if you ask me.”