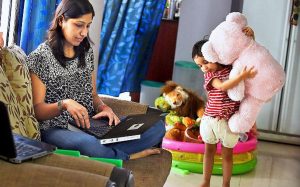 NEW DELHI :The Netherlands is on the verge of making work-from-home a legal right for employees. Last week, the Dutch Parliament’s lower house passed legislation in this regard. The European country now needs to wait for approval from the Senate. The new bill is an amendment to the Netherland’s Flexible Working Act of 2015, which allows workers to request changes in their working hours, schedule and even place of work.

Now, Netherlands, taking a leap forward, is planning to make work-from-home a legal right for the employees. The lower house of the Dutch parliament has already passed the legislation and the bill is awaiting approval from the Senate. If the law is passed, Netherlands will be the first country to legally provide the remote working flexibility to the employees.

The bill was proposed by two Dutch lawmakers, Senna Maatoug, a member of the GroenLinks Party, and Steven van Weyenberg, a member of the Democrats 66 Party. According to the proposed bill, an employee has the right to request a work from home option, and the employer must consider the request. The employer can’t disregard the request outrightly without considering any factors or providing any reasons. The Netherlands became one of the first countries to make work from home a legal right after the Dutch parliament approved legislation. Work from home, also known as remote work, is an employment arrangement which facilitates the employees to work from anywhere.

According to media reports, two Dutch lawmakers in Netherlands are proposing a legislation to allow remote-working flexibility by law. This law will allow people to demand work from home as a legal right. The pandemic has fueled a shift in attitudes about work, with many workers seeking to maintain some of the flexibility they’ve experienced over the last two years.
According to Bloomberg -that work-from-home legislation was approved by the lower house of the bicameral parliament of the Netherlands. Importantly, the legislation now needs a green light from the Dutch senate before its final adoption.  As per the law, employers will have to consider employee requests to work from home as long as their professions allow it.
Currently, employers in the Netherlands can deny any request from workers about working from home without giving any reason. Under the new law, employers must consider all such requests and give adequate reasons for refusing them. “It allows them to find a better work-life balance and reduce time spent on commuting,” said Senna Maatoug of the GroenLinks party, reported the Wall Street Journal. Maatoug was one of the co-authors of the bill.
While some companies have been accommodating in bringing their employees back, others like Salesforce have mostly done away with in-office working completely. Some others, like Tesla, still have coerced employees to return to the office. Tesla founder and CEO Elon Musk had warned employees that they could either return to the workplace or leave the company.
(With Media Reports).