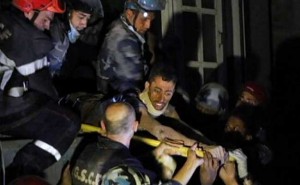 KATHMANDU: A 28-year-old man spent over 80 hours with three dead bodies inside a collapsed apartment in earthquake battered Kathmandu in Nepal. A woman spent 50 hours wedged between two slabs in the debris of a five-storey building. They were both rescued on Tuesday.
Rishi Khanal was pulled out of the debris of an apartment block on Tuesday in a five-hour rescue by a Nepali-French search team on Tuesday.Mr Khanal appeared to have had no access to food or water during his ordeal, which began on Saturday afternoon when a 7.9 magnitude earthquake hit Nepal, killing at least 5,000 people and destroying buildings.
“It seems he survived by sheer willpower,” said Akhilesh Shrestha, a doctor who treated him.Mr Khanal had been on the second floor of a seven-storey building when the earthquake struck. The top floors were intact and the teams drilled down to him after he shouted for help and responded to questions in Nepali.Doctors think he may have a broken leg.
A woman, Sunita Sitoula, was pulled out by Indian rescuers 50 hours after she got trapped under the rubble of a building in Basundhara of Maharajgunj.The survivor is now camping at a local school with her husband and two sons who managed to escape unhurt.
“It feels like I have come into a different world,” said Sitoula, after members of the Indian National Disaster Response Force (NDRF) pulled her out. “We got the information that a lady is stuck between two slabs. There is some cavity and she is alive,” said NDRF officer Kulish Anand.
“Firstly, we stabilised the particular area and then we gave some life saving medicine to that particular lady. After stabilising her, we just took her out.”Hundreds of people are still trapped under tonnes of debris in the Kathmandu Valley and the worst-affected remote mountainous areas, as rescue workers are desperately searching for survivors of the Saturday’s earthquake.