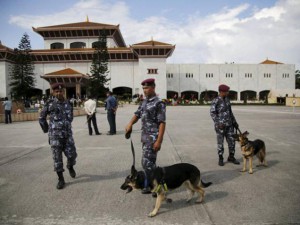 KATHMANDU: Nepal on Sunday adopted its new fully secular and democratic Constitution, achieved after seven years of painstaking deliberations, amid violent protests by minority Madhesi groups over a seven province federal structure.
“I announce the presented constitution of Nepal, passed by the Constituent Assembly and authenticated by the chairman of the Constituent Assembly, effective from today, 20 September 2015, before the people of Nepal,” President Ram Baran Yadav said as he unveiled the statute in Parliament.
“I call for unity and cooperation of all at this historic moment,” he said at the special ceremony at the Constituent Assembly (CA) hall in Naya Baneshwor to mark the Himalayan nation’s transformation into a secular, federal democracy from a Hindu monarchy.
He added: “The Constitution is the common document of all of us to protect our freedom, independence, geographic integrity, and sovereignty in people.”With this the Interim Constitution has been annulled.
President Yadav said the newly promulgated ‘Constitution 2072’ has institutionalised republicanism in the nation. He hoped that the Constitution would lead Nepal to economic development.
The new Constitution has given an opportunity to maintain unity in diversity in the nation and ensure rights of all, he added, while addressing the final meeting of the CA as the Assembly unanimously endorsed an acknowledgement motion, thanking the President for announcing commencement of the statute.
It has been endorsed by 85 per cent of the 601 members of the CA and has the provision of a bicameral legislation. The Lower House or the House of Representatives will have 375 members and the Upper House has 60 members.
The Constitution has 37 divisions, 304 articles and 7 annexes. The seven provinces will be finalised by a high-level commission within a year.Sunday’s historic moment came amid protests by Madhesi groups over the issue of federating the country.
Violence surrounding the federal structure that will divide the country into seven provinces has triggered violence in the Himalayan nation, claiming at least 40 lives including one reported on Sunday. Promulgation of the long-pending Constitution came amid high security, including a large number of security personnel deployed at the CA hall.
In central and eastern Nepal as well as in hilly districts, firecrackers went off as people celebrated the occasion of having their own Constitution — the first to be drafted by elected representatives — after a 67 year—long democratic struggle.
Madhesis and the Tharu ethnic communities in southern Nepal and some western districts are opposed to the new Constitution as they believe it has failed to address concerns raised by the Madhesis and the Tharu ethnic communities.
India, that sent Foreign Secretary S Jaishankar as Prime Minister Narendra Modi’s special envoy to urge top Nepalese leadership to address concerns of all sides, had expressed concern over the ongoing violence.
Promulgation of the statute should be an occasion of joy and not violence, Mr. Jaishankar said on Saturdayyesterday, a day before the unveiling of the new statute following protests that has spilled over to districts bordering India.
Security was tightened in the southern Nepal districts, where nearly 40 people were killed over the last one month during violent protests against the seven province model that would be incorporated in the new Constitution.
One protester was killed and several other injured as police opened fire at protesters demonstrating defying curfew and declaration of prohibited zone in Birgunj, a town bordering India.
Security has also been tightened in and around Rastrapati Bhawan, Prime Minister’s Office, residents of chiefs of diplomatic missions in Nepal and other high government officials and foreign missions.

Vehicular movement was very thin in Kathmandu, Lalitpur and Bhaktapur, where people lighted candles at public places soon after the President unveiled the new Constitution.
Earlier, a bomb threat was sounded in two places of Lalitpur district, adjoining Kathmandu, but the suspicious objects were found to be hoax, police said.