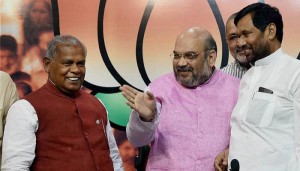 NEW DELHI: An exit poll on NDTV channel Friday predicted an edge for the BJP-led alliance in the Bihar Assembly elections giving it 120 to 130 seats in the 243 member House.
The rival JD(U)-led Grand Alliance has been projected to get between 105 and 115 seats.The poll showed that the NDA led in three phases–second, third and fourth while the other grouping led in the remaining two phases.
In the first phase comprising 49 seats, the Grand Alliance has been given 28 seats and the NDA 20. In the second phase with 32 seats, the alliances have been projected to get 12 and 19 respectively.

The BJP-led alliance is tipped to get 28 seats in the third phases, which has a total of 50 seats. The Grand Alliance gets 21 seats.The fourth phase, which has 55 seats, the JD(U) alliance is predicted to 21 seats, 10 less than the NDA.
Surprisingly, the last phase, where Muslims and OBCs were a major factor, the NDA is predicted to get 27 of the 57 seats giving it a big edge. The JD(U)-led alliance is tipped to get only 28 seats.Overall, the “Others” has been given 8 seats.
Yesterday at the end of the polling, most of the exit polls predicted a close fight giving an edge to the Grand Alliance while one poll predicted a clean sweep for the NDA.