MUMBAI: Making it clear that his party had not sought Maharashtra Chief Minister Prithviraj Chavan’s removal from the post, NCP chief Sharad Pawar today said that he was, however, not averse to the idea.
“NCP has not demanded (to Congress) that Chavan be replaced,” Mr Pawar told reporters. His comments came on a day when Mr Chavan said he was not aware of any decision by the Congress high command to replace him after the party’s dismal performance in the Lok Sabha election.
“It is the prerogative of Congress to change their leader (Chavan). They will consult us when they take the decision. I won’t deny that the issue was discussed,” Mr Pawar said. “The Congress leadership wants me to lead the joint campaign of the two parties for the Assembly elections,” Mr Pawar said.
The chief of the Nationalist Congress Party (NCP), a former chief minister of Maharashtra, said he had held meetings with Congress leaders A K Antony and Ahmed Patel recently to discuss preparations for the Assembly elections. 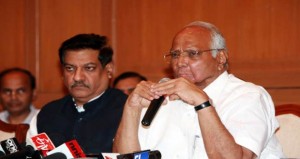 Asked to comment on reports that former Union Home Minister Sushilkumar Shinde may replace Mr Chavan as chief minister, Mr Pawar said, “There is no cause for us to oppose if Shinde comes (as chief minister). However, we have not demanded that the chief minister be replaced.” Mr Pawar said he did not foresee any problems when Congress and NCP leaders discuss seat-sharing for the Assembly polls. The alliance government, into its third term, faces elections in October.