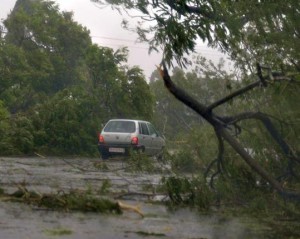 NEW DELHI : Andhra Pradesh Chief Minister N. Chandrababu Naidu has urged the Centre to treat the devastation caused by severe cyclonic storm, Hudhud as a “national calamity” and requested for an adhoc assistance of Rs.2,000 crore pending evaluation of the damages.
Mr. Naidu wrote a letter to this effect to Prime Minister Narendra Modi after the latter spoke to him over telephone and assured the Chief Minister of all help from the Centre to tackle to the situation.
Three people were killed in wall collapse and uprooting of trees in Visakhapatnam and Srikakulam districts as the severe cyclonic storm, Hudhud crossed the coast near Pudimadaka in Visakhapatnam which bore the brunt of the devastation.
As many as 320 villages in 44 mandals of Visakhaptnam, Vizianagaram, Srikakulam and East Godavari districts have been affected. More than 1.35 lakh people have been shifted to relief camps, while 24 NDRF teams have been deployed. The authorities pressed six helicopters and deployed 56 boats/ launches and 155 medical teams in the affected districts. Two army columns too were deployed.
While 50-year-old woman, G. Panchvati died in wall collapse at Kondram village, Anakapalli mandal, Mangari Yerrayya (58 years) of Palavalasa village, Padmanabham mandal was killed when an uprooted fell on him. Both the incidents occurred in Visakhaptnam district. In another incident, Ganta Yoganadham ( 45) of Gandapeta village, Santhabommali mandal died when an uprooted fell on him.

Mr. Narendra Modi’s call came when Mr. Naidu was in the middle of a press conference after he reviewed the latest situation with Chief Secretary I.Y.R. Krishna Rao and other top officials. Thanking Mr. Modi, he said “Government of India has done extremely well Sir”. He informed the Prime Minister that he would leave for Visakhapatnam this evening and keep him posted of the developments. He assured him that the situation would be analysed and rescue and rehabilitation measures would be launched.
Mr. Naidu appreciated the help extended by the Centre and said Union Home Minister Rajnath Singh spoke to him last night, even as the Cabinet Secretary was in constant touch with State Government.
The Chief Minister said, if necessary, he would camp at Visakhapatnam for the next two three days to oversee relief and rehabilitation measures and till normalcy was restored. He announced that the ongoing Janmabhoomi and Maa Vooru programmes have been suspended for the next two days and that senior IAS officers were being deputed to the affected districts.
He assured that men and materials would be mobilised to take up relief and rehabilitation measures and normalcy was restored. With the communications getting totally disrupted in Visakhapatnam and surrounding areas, Mr. Naidu said that he held a meeting with telecom service providers and urged them to restore them at the earliest.
Mr. Naidu appealed to the people in affected areas to upload photos/ videos of the cyclone damages to web link FTP://bhuvan-ftp.nrsc.gov.in. He said the uploaded images would automatically go to the nrsc map and the their locations would get highlighted. He said the file name should be the place name and user name as well as the password was hudhud123.
Earlier, the Chief Secretary appealed to the people in Visakhaptnam and other affected districts to remain indoors as after a few hours of lull, there would be intense rains and heavy winds from this evening. He said that at many places trees and electricity poles were uprooted due to the intensity of winds.
Meanwhile, the Indian National Centre for Ocean Information Services (INCOIS) said the Significant (average) wave height registered by the Wave Rider Buoy deployed off Visakhaptnam was 7.5 meters at 0830 hrs on Sunday morning. There was a decreasing trend later and wave height was 5.2 meters at noon.
However, it was cautioned that the wave heights would attain highest value of 9.4 meters around 1730 hrs and high wave conditions would continue thereafter till the end of the day. The INCOIS Automatic Weather Station on board RVS Kaustubh, a research vessel stationed in the Visakhapatnam harbour registered a wind speed of 177 kmph at 1130 hrs.