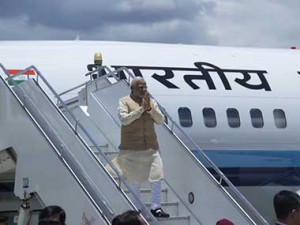 NEW DELHI : Multiple inquiries are determining how a dummy grenade used during a security drill was left behind on a plane that was reportedly on stand-by to fly Prime Minister Narendra Modi to the United States last week.The Air India plane flew from Mumbai to Jeddah via Hyderabad, packed with passengers early on Saturday night.
Civil Aviation Minister Ashok Gajapathi Raju described the incident as a “failure” by airport officials. “The grenade may have remained after the mock drill,” he said, according to news agency PTI. “There is some failure and this lapse not be condoned,” he said.
National carrier Air India appeared to be attempting to downplay the incident. In a statement, it said the “suspicious object” found by cabin crew before the plane landed on Jeddah appeared to be “a plastic wrapper.” However, the airline said an inquiry had been commissioned.
The pilot reported the object to the Air Traffic Control at Jeddah and the plane was checked thoroughly by experts when it landed.Sources in the National Security Guard, which is a well-trained and super-skilled counter-terrorism force, confirm that a drill was carried out by the agency at the Delhi Airport before the PM returned from the United States.
The National Security Guard keeps carrying out anti-hijacking drills on various aircraft to keep the force fighting fight in any given circumstance. An inquiry is now being held by the NSG to determine whether its team may have inadvertently left behind any material on the plane after the drill.
Sources also stressed that the agency does not use live ammunition during these safety exercises.

They pointed out that the fact that the dummy grenade was left behind signals the pressure  under which commandos are made to conduct exercises that are key for their training and preparedness. In this case, they say, the commandos were most likely rushed through the drill since the plane had to be returned for commercial operations.